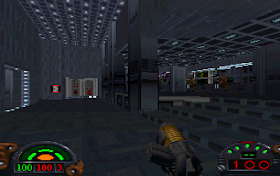 Genre: Action, FPS
Perspective: 1st-person
Direct Control: Direct Control
Gameplay: Shooter
Setting: Sci-Fi / Futuristic
Published by: LucasArts Entertainment Company LLC
Developed by: LucasArts Entertainment Company LLC
Released: 1996
Platforms: PlayStation (PSX, PS1), DOS
You play for Kyle Katarn, the former Imperial soldier and the current mercenary in the service of the Rebels, who will, in addition to stealing the Death Star plans, prevent the Empire from launching a mass production of a new kind of robots capable of destroying any Rebel base overnight.
In Dark Forces, you will not only have to break through the crowds of enemies to the treasured Exit button, but to perform clearly assigned missions that are in full agreement with the general storyline. The plot is revealed not only in briefings, but also in animation inserts, which adds to everything happening a little more liveliness. The game's events will bring Kyle not only to the imperial bases. He will visit both the surface of the ice planets, and in the alien palaces, and, of course, one could not do without visiting the sewers.
Kyle has the ability to look up and down, jump and crouch. In this case, all the abilities will have to be used to complete the tasks - without creeping under obstacles and jumping on platforms it will not do. But do not forget about shooting, one of the main components of any game of this genre.
There are ten types of weapons to choose from. Arsenal is quite diverse and includes everything from laser rifles and grenades to mortars and ion cannons. Some weapons have an alternative mode of shooting, which only adds a little more variety and depth to the gameplay. Opponents, who will have to test all the weapons available to you, will not let you get bored for a long time.
Of course, Imperial officers and Storm Troopers will not be able to provide worthy resistance, but the various forms of robots, droids and aliens already pose a sufficient danger to Kyle, and they should not spare any ammunition.