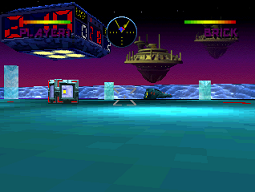 Genre: Action, Sports
Perspective: 1st-person
Gameplay: Vehicular Combat Simulator
Published by: 3DO Company
Developed by: Cyclone Studios
Released: 1995
Platform: 3DO Interactive Multiplayer
Launched in the beginning in the form of prototypes, the demo versions of Battle Sport evoked loud noises from players around the world for many months. No less violent reaction was on the 3DO tour. Then there was a game that will amaze and attract a very long time.
The plot of the game is fantastic - the action takes place in the distant future, when athletes are no longer satisfied with competitions such as modern football matches, in which an ankle injury looks like a terrible tragedy. There, in order to be able to throw something similar to a ball into the opponent's goal, you sit in a tank equipped with guns, lasers and missiles. Your task is to score a goal, using for this purpose all possible means of fighting the enemy. As you already guessed, the game is especially good for playing together. Battle (match) takes place in 50 different arenas, and you can choose both the arena itself, and the tank, and the enemy.
Along with simple scenes, but fast enough shooting, a large number of detailed images, flying scoreboards, advertising cutscenes and details of the terrain were introduced in order to emphasize the high speed of action. Battle Sport is full of game elements, making the game even more attractive.

The key to winning is a good arena knowledge and an especially thought-out strategy for every fight.
The game in Battle Sport requires serious tactics. Fast tanks are weak, heavy - slow. On light tanks, one should use the slightest opportunity to slightly weaken the enemy, so that then, in a decisive confrontation, face to face, his superiority was brought to nothing.
Move on. Do not stay in one place, or they'll kill you. Please note that the time during which you can hold the ball is limited. The flight of an abandoned ball is affected by the speed and direction of movement of your tank.
Do not buy tanks at the beginning of the game. Defeat several opponents, including Shudow, and only then spend money. It is better to immediately get the best tank.

There are four modes: two for playing alone and two alone. You have the opportunity to choose a tank, enemy, arena, time of day. The gates may be stationary or moving.
A task. Control
Select the menu by pressing the R and L buttons, to confirm the selection, press R.
Your task is to score as many goals as possible and not let the enemy do it. The bout consists of three rounds. The arena is full of obstacles and useful items.
After throwing the ball, you must quickly get to him, grab and as soon as possible throw in the gate (C), coming close to them. Having intercepted the initiative of the opponent, if the ball can not be taken away from him, destroy it by shooting cartridges (A) or missiles (B). However, after three seconds, "destroyed" is reborn in a new tank.
The pointer in the center of the screen shows where the ball is, and when the ball is captured - where the gate is.
To jump, press R + L.