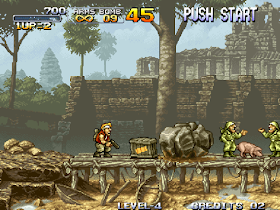 Genre: Action
Perspective: Side view
Visual: 2D scrolling
Gameplay: Platform, Shooter
Vehicular: Tank
Narrative: War
Published by: Nazca Corporation
Developed by: Nazca Corporation
Released: 1996
Platforms: Neo-Geo, Game Boy Advance (GBA)
The history of Metal Slug begins much earlier than the release of the first part of this popular series. The same team that was the authors of this game, created under the leadership of the Japanese company Irem a series of hits on the iron machine gun M92: Gunforce (1991), In the Hunt (1993) and Gunforce II (1994). The last game the true Metal Slug fans are often called "Metal Slug Zero". Indeed, gameplay, sounds, animation - a lot in these games shows a kinship with Metal Slug. Borrowing a lot of finds from the creation of the Irem game from Nazca nevertheless introduces a number of innovations that have turned the next masterpiece into a hit.
2026 year. The world faced the threat of global terrorism face to face. Small, but extremely numerous and well-organized groups of terrorists of the Rebellion are opposed by a powerful, perfectly armed Regular Army. One of the important official officers of the RA, General of the Marine Corps Donald Morden, who has a reputation as an excellent officer and a loving father, loses his son as a result of a fatal error of the intelligence services and negligence of the army's senior military commanders, who are mired in corruption and bribery. Genral Morden begins his own war against the RA and is at the head of the Rebellion. Under his leadership, the troops of the Rebellion, replenished by defectors and weapons, are turning into a formidable force and are beginning to prepare for a massive offensive on the detachments and bases of the RA around the world. Despite the available intelligence on the intentions of the Uprising, the higher ranks of the RA did not take care of taking appropriate countermeasures. As a result, the RA leadership caught off guard by the terrorists' advance urgently begins to prepare belated plans for a counter-offensive against the forces of the Rebellion. To this end, the development of a top-secret program for the creation of a powerful offensive weapon code-named SV-001 was launched at a rapid pace. However, due to oversight, most of the party of ready-made weapons falls into the hands of the Rebellion. Having lost the last hope, RA falls apart. But in this difficult time there were people ready to rebuff the enemy. The first lieutenant of the special forces "Pilgrim's Falcons" Marco Rossi, side by side with fellow-armorer Tarma Roving, is putting together the latest RA forces to organize a counter-offensive against Morden's troops.
Initially, at your disposal only a 50AE pistol with unlimited ammunition and a dozen German offensive grenades Stielhandgranaten 24 "Rattle." In the course of the game you will also have: HV-01 machine gun, RK-02 rocket launcher, FS-03 flamethrower, SG-04 shotgun, and also machine gun that occasionally hits you on the way and, of course, SV-001 "Metal Slug "(so named because of its resemblance to a reptile slug), that same abducted secret development of the RA, which gave the name of the entire series, a jumping tank equipped with a 12.6mm anti-aircraft Vulkan machine gun and with a 127mm gun on board. The soldiers of General Morden will fight against you as infantrymen equipped with various types of firearms, grenades, knives, which they use in close combat, armored shields for defense, and armored vehicles: tanks, self-propelled guns, airplanes, helicopters. The enemy will pour on you from all sides of the screen one by one and groups in trucks and parachutes.
The army of Morden, traveling on German armored vehicles from the Second World War with symbols resembling Nazi, is more like a caricature fascist. In the course of the game, you will repeatedly release prisoners of war seized by the enemy, and those in gratitude will extract from your underpants various utilities, from bonuses to weapons. In the game, only six missions with beautiful backgrounds, perfectly animated characters (do not forget that the color of the blood changes to the conventional in the BIOS menu of the machine), as well as excellent voice acting, music and a lot of destructible objects. Narcotics caricatures of characters and sparkling humor combined with excellent graphics - the distinctive features of the entire series of Metal Slug, which provided her with immortality. In addition to NeoGeo MVS / AES, Metal Slug was also transferred to the platforms GameBoy Advance, NeoGeo Pocket Color and PlayStation 2.
‹
›
Home
View web version