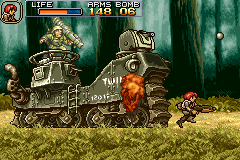 Genre: Action
Perspective: Side view
Visual: 2D scrolling
Gameplay: Arcade, Platform, Shooter
Published by: SNK NEOGEO USA Consumer Corporation
Developed by: Noise Factory
Released: 1996
Platforms: Game Boy Advance (GBA), Neo-Geo
The gameplay is very similar to the previous games of the series, but with some innovations: the system of lives and the system of cards. The system of lives replaces the original damage system from the past games of the series. When dealing damage, the life system decreases (different attacks cause a different amount of damage). When collecting food, the life strip is restored. The player will instantly die if the strip of lives is emptied or he falls into the pit or if something crushes him. The card system is an element of the game. Cards can be obtained in various ways (rescue of hostages, breaking boxes and winning over bosses). Each card provides an opportunity to learn information about the various elements of the game, and sometimes gives a way to discover new types of technology. As in the previous games of the series, the game contains various types of technology (metal slug).

The soldiers of General Morden land and seize the island, where the exercises of new soldiers of the Sapsan team are held. For the first time in the game series, the player takes control of two recruits, Walter Ryan or Tyra Elson.
‹
›
Home
View web version