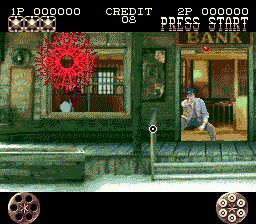 Genre: Action
Perspective: 1st-person
Gameplay: Arcade, Rail Shooter
Setting: Western
Published by: Konami (America)
Developed by: Konami Co.
Released: 1994
Platforms: SEGA Genesis / Mega Drive, PlayStation (PSX, PS1)
Very rare type of games for 16-bit - "video shooting". Unlike the first part, now you are in the role of a gallant cowboy. The graphics are cinematic, that is, they consist of small cuts from the footage. There is also a game for two. It's a pity only passes quickly, and is very interesting for fans of games such as Mad Dog McCree.