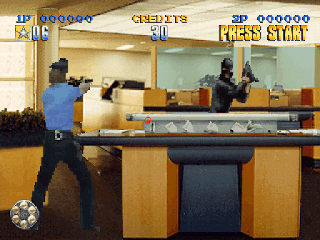 Genre: Action, Compilation
Perspective: 1st-person
Gameplay: Arcade, Shooter
Interface: Point and select
Published by: Konami of America
Developed by: Konami Computer Entertainment Chicago
Released: 1997
Platforms: PlayStation (PSX, PS1), SEGA Genesis / Mega Drive
In Lethal Enforcers you are a fighter with various criminal elements, you will need a good eye, a steady hand and a reliable controller. You will kill scum on the streets of cities, in the port, in Chinatown and of course in the Wild West. Do not expect stunning graphics from the game, Konami invites you to plunge into the world of old games and shoot digitized static characters from the world of bank robbers, Chinese mafia and drug dealers. They just jump out from behind covers, you "bang" on them and they're like targets in a shooting range, "plop". It's actually pretty fun, like time travel, pure arcade. The graphics on the PlayStation version look significantly better than the SNES version, and the CD sound was borrowed from the SEGA CD version. In general, fans of advanced graphics technologies should not pay attention to this game, but fans of the old school and those who just want to have fun - welcome to the world of Lethal Enforcers!