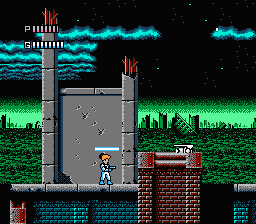 Genre: Action
Perspective: Side view
Gameplay: Arcade, Platform
Setting: Sci-Fi / Futuristic
Published by: Sun Corporation of America
Developed by: Sun Electronics Corp, Tokai Engineering
Released: 1990
Platform: Nintendo (NES)
This is a classic flat shooter from left to right. It was prepared as a game on the first Terminator, but then it turned into an independent project. In two phrases about the plot: it happens in the future, and you take revenge for your father. Your enemies are all kinds of robots and the technology of the future, from which prizes sometimes fall out. Levels with a beautiful background, the music also did not disappoint. Japanese version: Raf World.