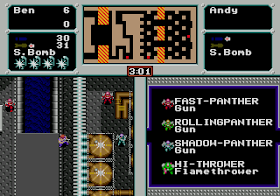 Genre: Action
Perspective: Top-down
Visual: 2D scrolling
Gameplay: Arcade, Shooter
Published by: Sage's Creation
Developed by: SEGA Enterprises Ltd.
Released: 1991
Platform: SEGA Genesis / Mega Drive
Action limited in time arcade, in which, perhaps, it is better and more interesting to play together.
Essence: two men (Andy and Ben, if someone is important) run around the level (top view, the timer is ticking), fight through a variety of weapons (including hand guns, guns and even superbombs) with a lot of enemies and look for red oblique crosses - On each of them it is necessary to put a bomb (usual) and to blow it up. Why all this is happening is incomprehensible (hurray!). To facilitate the passage of the level at the top of the screen there is a map on which all the key places are marked.
There are many enemies in the game, there are both people and monsters, everything is different from each other. Someone shoots, someone fights only in close combat, somebody even shoots fireballs or something like that, everyone has different strength and speed (so do not think that you can kill everyone with one shot), but admire This zoo is no time (sorry!). But the main difficulty here is not in the power of the enemies or even in the time limit, but in the fact that the amount of ammunition is also limited, so it will not be possible to arrange an epochal massacre. But it will be possible to do something that we did not expect - to cling to the wall during the shelling and thus survive. That is, if you like, an ancient stealth-action for a while.
From the graphics of something special to wait is not necessary - the form, as already said, from above, the game is ported from the slot machines. In my opinion - for this genre is more than cute, everything is clear on the screen, and this is the most important thing, because it's impossible to scrutinize anyway (and even if you look closely, you can see that the drawing here is decent - the port turned out to be quite good) . The verdict, however, is only for people hardened in these games. And, I repeat, if there is an opportunity to play together - this will be the best option.
‹
›
Home
View web version