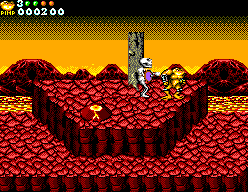 Genre: Action
Perspective: Side view
Visual: 2D scrolling
Gameplay: Arcade, Beat 'em up / Brawler, Platform
Published by: Tec Toy Indústria de Brinquedos S.A.
Developed by: Rare
Released: 1996
Platforms: SEGA Master System (MS), Super Nintendo (SNES)
Of course, many will prefer to play NES or SNES variants of this game, but at least look at their fellow think I will not be harmful. This game certainly loses in excitement above the above options, but it is easier to pass and so aggressive actions, which I created from a rush of anger with a joystick from the eight-bit, after the next passage of the third level, there will be no more.

Two Frog Pimp and Rash were invited to participate in the demonstration by Professor T-Bird of a powerful machine - Gamescape, capable of creating an artificial world! All would be nothing, if there was not a villain of the Queen of Darkness, who neither live nor be: you need this thing! Your time has come - save everyone and everything and put an end to the arbitrariness of the Queen of Darkness :) However, not everything is so simple - the Queen has prepared for you a lot of trouble.
The game was created in London, and it was planned that Virgin will sell it, but it just so happened that it appeared only in Brazil. Let me remind you, the original came out on Super Nintendo a year earlier. In comparison with it, the graphics are certainly worse, though, and copied in more detail, the animation is excellent, the music is also, and the gambling speed of the game makes it an incomparable hit!
‹
›
Home
View web version