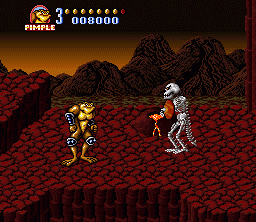 Genre: Action
Perspective: Side view
Visual: 2D scrolling
Gameplay: Arcade, Beat 'em up / Brawler, Platform
Published by: Tradewest
Developed by: Rare
Released: 1993
Platforms: Super Nintendo (SNES), SEGA Master System
In the story of the frogs visit secluded castle, located among the mountains of northern Tibet, where Psikon Corporation is experiencing its new gaming system with an incredibly deep immersion in virtual reality. Suddenly, out of the screen into the room erupts anthropomorphic pig, ministering the Dark Queen and Silusu Volkmairu and kidnaps the daughter of the president of the company, Michiko Tasёku and ZITC who tried to rescue the girl. Remaining in the real world, frogs decide to follow them, to save his friends and thwart villains to seize the whole world.
You can play either alone or together, in this case the player is able to choose one of the two toads Pimpla or Rush. The characters have a unique set of techniques and different combinations of punches - in terms of gameplay game is a classic representative of the genre "izbey them all" and adheres to the traditions of the previous parts. What happens, as in the past, drawn in a humorous cartoon style, toads fighting with opponents, regularly using a theatrical coup de grace, when their limbs grow to enormous size, or turn into an object such as anvil or pood weights. Difficulty still very high.
Version for Sega Master System in terms of content does not differ much from the original, however, due to the lower performance of its graphics console is somewhat simplified, there are some bugs and Glitch. Reduction and underwent a series of music, at certain levels, repeated melodies, and in some places - non-existent. for the Sega version was to appear not only in Brazil but also in Europe - even the release date has been scheduled for July 1994, and in the British journal the Power Sega appeared full review. Ultimately, however, the publication for unknown reasons did not take place.
‹
›
Home
View web version