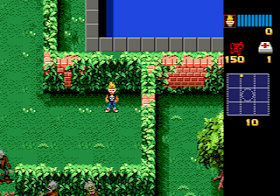 Genre: Action
Visual: Isometric
Gameplay: Arcade, Shooter
Narrative: Horror
Published by: Konami
Developed by: LucasArts
Released: 1993
Platform: SEGA Genesis / Mega Drive
Superb, simply amazing game from LucasArts, the best in its genre for Sega Genesis/MegaDrive. In the game, you can play either Zeke's boyfriend or Julia's girlfriend. You have to save defenseless neighbors. Destroying different zombies and monsters from a variety of films. The game has a lot of humor. And as there is a variety of weapons. And the most different bonuses. You can also become a monster yourself, while you can easily break through walls and destroy monsters. The game has 55 levels, 48 ​​regular and 7 bonus. Your goal is to save all the neighbors. Then there will be a door from nowhere, as in the game Spot Goes to Hollywood. If zombies are eaten by someone. That in the next level, the neighbors are getting smaller. Their number can increase if you wake up successfully to all neighbors for a couple of levels. If you do not save more than one neighbor, the game will be lost.The main villain in the game is Dr. Tongue. From time to time it will come across to us, sometimes even turn into monsters. The game also contains aliens, exactly the same as in the game Herc's Adventures for PlayStation (PSX). By the way this game is made on a similar principle, only now you will go to the ancient world of ancient Greece. The game saw a sequel only to the Super Nintendo (SNES) game console called Ghoul Patrol. In the game Maniac Mansion: Day of the Tentacle has a secret level, referring to the game Zombies Ate My Neighbors.In the US, the game was released under the name Zombies Ate My Neighbors.In Europe, the game was censored and came out under the name Zombies, it was changed several elements, including a chainsaw in the maniac, replaced by a fire ax.

In order to get a bonus hidden in the first level, find a bazooka or a bulb in the form of a ghoul and shoot a wall of vegetation in front of the very first house.