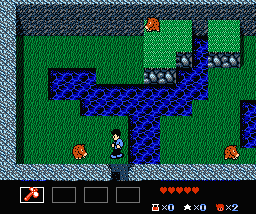 Genre: Action
Perspective: Side view, Top-down
Gameplay: Platform
Published by: Nintendo of America Inc.
Developed by: Nintendo R&D3
Released: 1994
Platform: Nintendo (NES)
Continuation of the glorious deeds of the first part.
The story begins when the protagonist Mike telepathically Mika (the princess rescued by Mike in the first part) broadcasts a message that knows how to unravel the secret cipher on the space object found in the first part of Mike and his uncle Dr. Jones. Together they decide to read and suddenly the main character is carried over into the past. And in the Stone Age! After helping the local natives, he finds an important artifact of Tetrad (a telepathic connection with Mika still remains). And now it is necessary to run through several time epochs in search of other artifacts. In addition, with the help of Sherlock Holmes, you will find out that your opponent is behind the artifacts in the first part - Zoda! That's an ambush!
The game consists of nine chapters, which in addition to searching for artifacts to perform tasks for local temporary natives (including famous characters - the same Sherlock Holmes, Cleopatra, King Arthur and others). Each chapter has one or more bosses.
‹
›
Home
View web version