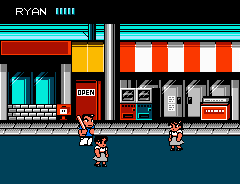 Genre: Action
Perspective: Side view
Visual: 2D scrolling
Gameplay: Beat 'em up / Brawler, Martial Arts
Narrative: Comedy
Published by: American Technos Inc.
Developed by: Technos Japan Corp.
Released: 1990
Platform: Nintendo (NES)
In the European middle school of the city of River City everything was calm, until two brothers appeared, hungry for unlimited power. After many people joined their group, the turn followed Ryan, the protagonist of the game. But he refused to join and eventually his girlfriend Cyndi was kidnapped. You have nothing left to do as to unite with a friend (although, you and he were recently enemies) Alex, in order to go against the terrorists together.
The game is a classic beat-em-up. You can fight with both your bare hands and feet, and with the use of improvised tools, which you will find at the level (trash cans, etc.). In the game, you can also go to the stores, buying food or weapons, or even skills, for the collected money.
What is noteworthy, in Japan the game took root more quickly than in America. Perhaps the latter influenced the output of Double Dragon.
‹
›
Home
View web version