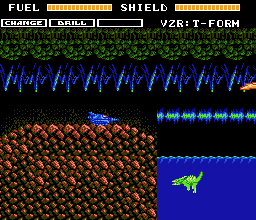 Genre: Action
Perspective: 1st-person, Side view
Gameplay: Arcade, Platform, Shooter
Setting: Sci-Fi / Futuristic
Published by: Asmik Corp
Developed by: Cyclone System
Released: 1991
Platform: Nintendo (NES)
In 1999, the world was suddenly overwhelmed by a wave of natural disasters. Scientists are completely bewildered, and here they decide that to solve global problems one must try to explore the inner part of our planet. For this purpose a special underground car was built, which was called VZR, but for the crew it had a second name - Wurm. Four different similar machines were already sent to the bowels of the Earth, but all of them mysteriously disappeared. And now the fifth crew Crew Chief Moby, in which the best of the best (one of crew members - the woman who has lost the father and the liked person in the previous research operations) is sent in a way. So, the main task of the crew, in addition to the main mission, will also be to solve the mystery of the disappearance of the previous Wurm machines. And we still have to solve the mystery of the mysterious crystals that were discovered underground.
"Chitei Senkou Bazolder" (in the US known as "Wurm: Journey to the Center of the Earth") is a game in which several genres are combined. First, we control the vehicle VZR in the style of the usual horizontal (side view) or vertical (top view) scrolling shooter, but from time to time the captain of the Moby team (the woman, by the way) gets out of the car, and the game offers us a platform level with a horizontal Scrolling, as well as there are stages with a first-person view, where we, controlling the sight, will need to exterminate enemy monsters from small arms. The game has only 5 levels, in which the crew of VZR-5 investigates the fate of previous VZR'ov. After completing each level, we get a crystal that opens a certain extra weapon for VZR.
In the levels where we control VZR, the game process is scrolled in both the horizontal and vertical projections (side view or top, respectively). In the side-scrolling mode, VZR can change its formation between the tank (Tank Mode) and the Hover Mode (above the ground). In the top view mode, the VZR can change the view between the Hover Mode and the full Flight Mode. In tank mode, we move along the ground, releasing shells in three directions, and also use a drill to destroy obstacles. In the floating mode, we can fly around the screen, but there is a fuel limit (that is, we can not do this all the time), in this mode you can also shoot in three directions and use a drill, but the main weapon can be changed to: Energy balls (fly around the screen) wave weapons (shoots in both directions). In the air mode, our apparatus appears as a fighter, in which instead of a drill laser weapons are used, discharges of which are reflected from the walls. In all modes, VZR has life energy and fuel scales, when one of them reaches zero, the game ends (by the way, the fuel scale is not used in tank mode). Defeated enemies sometimes give us fuel-saving bonuses.
The game also features a first-person shooter mode where it will be necessary to exterminate any monsters. The control is as follows: we move the VZR view from left to right to the right and shoot the weapon. On the screen there is an icon "Opportunity", which reflects the percentage of how much the opponent "ate" the bullets and how soon he will be killed. When the indicator reaches 100%, the battle ends. In order to raise interest faster, you need to aim at the weak point of the monster. In the game, you can switch between different weapons, some of which are more effective in these circumstances than others (all weapons are available on the screen).
When Captain Moby leaves VZR, the game moves to a standard platformer with a horizontal scrolling. Moby must go through numerous labyrinths in different rooms, looking for different objects or people needed to open various locked doors. She can jump, beat enemies with karate blows, and she also has a pistol (with a certain number of charges, not infinite).
The game is made to the conscience! It is very diverse in terms of gameplay, it's even possible that this is the most wide-spread game for NES, in which many genres, views and perspectives are intertwined. The graphics in the game are decent, not outstanding, but with the transfer of the character of the game copes perfectly. The music tracks are very atmospheric, and match the game environment. In the review on the site "GameFaqs" the game received the following points: gameplay - 7, plot - 10, replayability - 9, graphics and music - 9. Overall score - 9 points out of 10 possible.
‹
›
Home
View web version