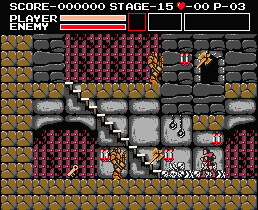 Genre: Action
Perspective: Side view
Visual: Fixed / Flip-screen
Gameplay: Metroidvania, Platform
Setting: Fantasy
Narrative: Horror
Published by: Konami Industry Co.
Developed by: Konami Industry Co.
Released: 1986
Platforms: MSX, SEGA Genesis / Mega Drive
At first glance, we have an old kind Castlevania, but this is far from the case - the structure of these games is different. You are given a small location of the castle for study, where you need to find the key for the next zone. In addition to finding the key, you can also find a variety of chests with treasures, which also need to be unlocked. They have different bonuses. Traders from time to time also meet (sometimes you have to work hard to find them), who sell all sorts of things for hearts. Weapons such as daggers and axes replace your whip and you can use them as much as you like, but you need to catch the ax on his return, otherwise blame yourself. In your arsenal there is also holy water and an hourglass (stop time). Of other things - a map (shows your progress) and two kinds of shields. After passing three small locations you are waiting for the boss.
In general, those who played Castlevania on Nintendo, the game will seem familiar, however, there are some new areas. For example, an additional level in the tower of Dracula, before the final battle. Well, the fight with Dracula is almost entirely different, although at first everything is as usual a classic beginning, but as soon as you beat it, the painting in the background will begin to spit out the bats - an interesting fight is ahead.
The only small drawback of the game is the management. The jump button is assigned to the "up" arrow, which sometimes causes inconvenience when climbing the stairs. However, if you have a gamepad - then no problem.
Graphics resemble Castlevania on NES, only slightly better. Everything looks even more beautiful - good colors, nice backgrounds, good special effects. The music is pretty much the same, the sound effects also have not changed much. People who are little familiar with Castlevania can have problems in completing the game because of its complexity, but it's more like the rule for the classic games of this series - go for it, the game is worth it.
‹
›
Home
View web version