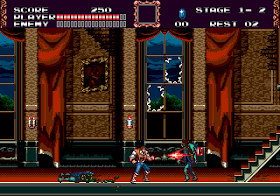 Genre: Action
Perspective: Side view
Visual: 2D scrolling
Gameplay: Platform
Art: Anime / Manga
Setting: Europe, Fantasy
Narrative: Horror
Published by: Konami (America)
Developed by: Konami Co.
Released: 1994
Platform: SEGA Genesis / Mega Drive, MSX
The main idea is unchanged - a hero armed with a cold and long weapon (whip, spear, etc.), beats them hordes of monsters and legions of otherworldly forces to eventually get to his blood and bloody enemy - Count Dracula. The main opponents, candles with prizes and additional weapons of the hero also remained from the time of the first eight-bit Castlevania. But! There were many fresh, unknown "little animals" - one time! The game took a big step away from the usual platform rally due to the unusual organization of moving coatings (spiral rise, gears, rocking towers) - two! And, finally, the very appearance of what is happening at times undergoes such changes that even a simple, in fact, segment of the road turns into a nightmarish obstacle course - three! Plus, a well thought out password system that remembers not only the level reached, but also the chosen complexity and the remaining lives. In short, having the desire to play a new game in the favorite series, is unlikely to find fault with Bloodlines. At the beginning of the game and after using one of the two continue you can choose the hero: American John Morris or Spaniard Eric Lecardo. I advise you to play for the second - it's easier and more effective super jump and more powerful weapon. In addition, John can whip diagonally up in a jump, and Eric-standing on the ground, which is much more convenient. The goal of the game is to overcome the evil spirits inhabiting six levels of buildings and, at the end, to whip up Dracula and his restless widow. Each building is divided into rooms, their number varies from 7 to 11. In the last room there is always a boss, his energy is indicated in the column ENEMY. Since most of the bosses' bosses love to beat more than ordinary "employees", at each level there are several more objects of this love (perhaps even steeper than the level boss). The main thing in the battle with them is to find a dead zone for each of the attacks, which usually alternate in strict sequence. The last three bosses of the game - Death, Medusa (not Easy) and Dracula - have several incarnations (from 2 to 4), alternately entering the battle. For their successful destruction, build up the power of your weapons in such a tricky way: before the dwelling of each of the three there is a ladder, but which you can not only climb but also descend. In this case, all the gutted candles are restored! At early levels, too, there was a similar, but there it was not so necessary.
Do not forget about the special weapons, it also changes when the fourth level of power is reached (the main weapon is ignited) and also returns to its original state after the first injury, but when applied, it destroys any pack of ordinary enemies and causes serious damage to the boss! In addition to the candles, the source of the prizes is the specially allocated graphically walls - if you break them, you can have a good refreshment.
The last advice is about small dirty trimmers. Spit on your SCORE, do not necessarily beat everything and everything. There are a lot of places where you can be well pressed, if you stay for even a second. But shielding passage and shooting creatures should not be pitied. The main thing is to hit them before the attack begins. If the enemy does not die the first time, he will surely be retarded with retaliation and will give you the opportunity to re-strike.

A - blow (can be put in squat and jump);
B - jump (jump to the side uncontrollable);
C - the use of superweapons, subject to the presence of energy crystals;
in the jump C + up - an alternative superweapon;
In (squat) - Eric jumps high up with a raised spear (you can shoot down weak creatures and candles with prizes);
And joystick up and forward in the jump - John clings to the whip for overlapping from above and flies on it forward while the button is pressed.