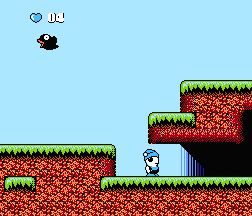 Genre: Action
Perspective: Side view
Visual: 2D scrolling
Gameplay: Metroidvania, Platform
Setting: Fantasy
Published by: Sun Electronics Corp.
Developed by: Sun Electronics Corp.
Released: 1991
Platform: Nintendo (NES)
This is the first game in a series of games about Hebereke, the main character of which, by the way, was even some time a talisman of the firm "Sunsoft". Many years later, the game was re-released as part of the "Memorial Series Sunsoft Vol.5" compilation for PlayStation (2002), and it is also available for download via the Wii Virtual Console (starting in 2010).
In this colorful game we have to play for the penguin Bop Louie (in the Japanese version - Hebereke). The protagonist gets into a strange parallel world, and we need to get out of there as himself, and his three friends: Shades, Freeon Leon and Gil. And friends lost their memory and take Bop Louie for the stranger, but after washing their brains on our side, they restore it and everyone remembers. Collecting the whole trinity, it is necessary to find a way out of the strange world, which is in the temple, the keys to which are hidden not clearly where.
‹
›
Home
View web version