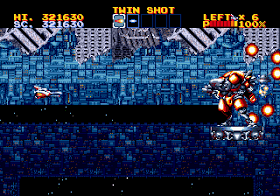 Genre: Action
Perspective: Side view
Visual: 2D scrolling
Gameplay: Shooter
Setting: Sci-Fi / Futuristic
Art: Anime / Manga
Published by: SEGA of America
Developed by: Technosoft Co.
Released: 1992
Platform: SEGA Genesis / Mega Drive
Future. An organization called the Galactic Federation, which protects the Galaxy from intrusions, is waging war with the hostile Ornus Empire. Soon, the Federation wins in this war, but it fails to destroy the main villains of the Empire. The latter, united, create a powerful army, and over the Galaxy there is a threat of seizure. The Federation is creating an experimental combat ship with the latest weapons. His pilot must penetrate the Empire and get to its leaders.

The game is a horizontal scrolling shooter (shoot 'em up) with side-side scrolling and 2D graphics and consists of several levels.
The game process is as follows. A spaceship controlled by a player moves around the level and destroys enemies. At the end of the levels are the bosses; Sometimes in the middle of the level there is an intermediate boss. After destroying the boss, the player can move to the next level.
The game presents several types of weapons, differing in power, the radius of destruction and the direction of the shooting. Also there is an opportunity to strengthen the current weapon by picking up a special object.
‹
›
Home
View web version