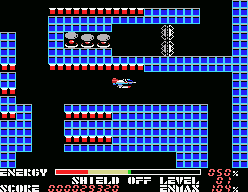 Genre: Action
Art: Anime / Manga
Gameplay: Arcade, Platform, Shooter
Setting: Sci-Fi / Futuristic
Vehicular: Mecha / Giant Robot
Published by: Game Arts Co.
Developed by: Game Arts Co.
Released: 1986
Platform: MSX
Thexder is a game of the genre shoot 'em up, where you act as a pilot of a combat robot that can at any time transform from a fur into a jet plane. Over 16 levels you have to fight with enemies, using self-guided laser weapons. However, it will not be possible to shoot forever, since the weapon has a fixed amount of energy, with full waste of which it is necessary to expect its restoration. Also, your robot is equipped with a shield to protect against enemy shots.
‹
›
Home
View web version