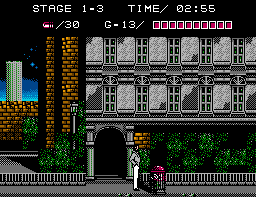 Genre: Action
Perspective: 1st-person, Side view
Gameplay: Shooter
Art: Anime / Manga
Narrative: Spy / Espionage
Published by: Vic Tokai
Developed by: Aicom Corporation
Released: 1990
Platform: Nintendo (NES)
The military satellite was shot down from near-earth orbit, and the world faced the threat of nuclear annihilation. Responsibility for the atrocity was assumed by the terrorist group "Mafat Conspiracy", which blackmails the American and Soviet governments, threatening to derail their space military programs. Terrorists demand that the Soviet Union stop its research in the field of electromagnetic waves, and the US government is asked to provide them with the whole of Los Angeles, as well as a ship equipped with nuclear warheads. The CIA and the KGB accuse each other of incompetence.
The mission of the special agent "Golgo 13" is to eliminate the leader of "Mafat Conspiracy", destroy the satellite interception system and rescue Dr. Burroughs, who was abducted from his laboratory in England many years ago and taken to Paris where he is currently held hostage.
The action in this game consists of five different types:
- Action with elements of Beat'Em Up and shooter (horizontal scrolling). Here we must go and destroy the enemies, armed with pistols, machine guns, boomerangs, grenades and knives. There will be even scorpions and dogs. To combat them, the protagonist uses his legs, and he is armed with a pistol and can collect additional ammunition to him. The game in this type of levels goes against the clock.
- Stationary actions (battles with bosses). Here we must help the hero to cope with such villains as Arm of Mafat, bodyguard Ahmad Khan, Canine. Here, too, the game is on time.
- Car driving "Ferrari" (view from the third person). In these levels, you will have to switch gears for overclocking the car, as well as throw grenades in vehicles encountered on the way with agents on board.
- Study of the labyrinth (view from the first person). This type of levels begins after entering the doors of certain buildings and structures. We will have to explore different labyrinths from corridors and rooms, using a pistol, a machine gun and hand grenades against the enemies. In addition to bonuses replenishing the number of cartridges and grenades, in these levels you can also find a night vision device that will help in passing particularly dangerous dark areas.
- Shooting from a sniper rifle (view from the first person). Here we will be able to stay as a hired killer and eliminate enemies, pointing them at the sight of a sniper rifle close-up. In this case, for an accurate hit, you have to take into account two factors - the trembling of the hero's hands, as well as the speed and direction of the wind.
Throughout the game, a CIA member named James will constantly provide us with information about the enemies and the location of Dr. Burroughs, he can also equip us with special weapons at our request. Also, more than once the hero will extend a helping hand and agent Sylvia.
All that was said in the review of the previous part of the game, you can safely correlate with the continuation of "Mafat Conspiracy, The". In addition to simply a colossal variety of genres in the game, there is also a complete confusion of views and perspectives. Plus, added two new features: a ride on the "Ferrari" and play the role of an assassin, shooting from a sniper rifle. At the same time, graphics and sound have become much better, the plot is even more interesting and twisted, and the overall action of the game even more resembles a dashing spy thriller.
‹
›
Home
View web version