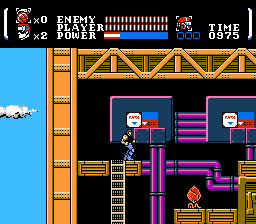 Genre: Action
Perspective: Side view
Visual: 2D scrolling
Gameplay: Platform
Published by: Taito Corporation
Developed by: Taito Corporation
Released: 1991
Platform: Nintendo (NES)
Action about the future, where we get used to the role of a special agent of Nova. An inflated hero, similar to Schwarzenegger, must defuse a super-powerful computer that rebels against its creators. To get to the aggressive machine, Nova must meet six agents on 6 levels and get a key from each. Using the key and entering the door, we fight with the boss. The main weapon of Nova, oddly enough, is a boomerang. It can be thrown not only forward, but also upwards. The range of throwing a boomerang can be increased by selecting sprockets along the way. With special diligence, you can find an armored suit that keeps you from any three attacks of enemies. For one only interesting gameplay this game can already be called a worthy project. Beautiful, diverse stages are only emphasized.

You are alone against a whole gang of terrorists, armed only with a boomerang - a weapon that went out of fashion even among Australian aborigines. True, the boomerang of Nova is honed as a steel blade, and the ability to throw it could make Nova the main hunter of Australia for rabbits, sheep and kangaroos.
To restore the information network, Nova must penetrate into six computer centers, where to find informants who will tell him where there are six magnetic cards that allow the Resident to resume activities for the benefit of humanity. With the cards in your pocket, you will have to return to the center of the Resident and make the necessary manipulations to restore it.
Almost everywhere you are waiting for terrorists who will shoot at you without any warning.
In each of the six sectors, their traps, their enemies and their own set of special encounters. Before you go anywhere, visit the first sector. This will give you an idea of ​​what kind of difficulties you are expecting.
There and here at your disposal are the stairs. Look for the right one, which will lead you to a meeting with the informant.

Found a new prize in the form of a circle can compensate him for the loss of current life. To do this, press START and move the joystick arrow from the upper left corner of the screen to this icon. Then, in turn, press START and SELECT, and the current lives will be restored. However, while the arrow stands on this icon, you can not use bombs.

Passwords for all levels