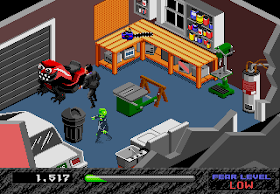 Genre: Simulation
Visual: Isometric
Published by: Electronic Arts
Developed by: Electronic Arts
Released: 1993
Platform: SEGA Genesis / Mega Drive
The Sardini family was involved in the murder of a guy who turned into a ghost, eager to avenge his death. The main task of the player is with the help of various items in the house, to scare each of the four family members living in the house.

When a person is scared, he will run away from home. The game involves four stages, as soon as all family members are frightened, they move to a new house, you follow them and everything starts anew. In total there are 4 houses in the game with 4 dungeons. From the second level in the houses will appear volatile heads, taking away energy from you. After that, the poltergeist will fight the final boss and the game is over. Scarecrows in each house there are more than 50 pieces. Present as very original (corpse in the trunk, frolicking cut off hand, ballet dancer twisting his head 360 degrees), and rather primitive (blood on the floor, fireworks, invasion of mosquitoes). When viewing such phenomena, the inhabitants of the house begin to go crazy with fear.

For every successfully performed scarecrow is given energy. Plasma appears only after the victim runs out of the room, where she was intimidated. Its amount is directly proportional to the number of horrors committed. See how many points awarded for the horror story, you can in the lower right corner. When it is over, the poltergeist will end up in the dungeon, where he must collect all the energy and lose as little health as possible. Each house has its own dungeon. For the game variety there is a collection of scarlet plasma. Each such plasma is drawn in the form of a letter. Different letters are different useful objects. You can use them at any time, while outside the dungeons and when fighting the boss.

Dog of the Sardini family

The dog of the family is the only living being in the house that knows about the poltergeist. When she sees him, she begins to bark, thereby depriving him of some of the energy. The dog can be neutralized with the help of a dog's bone. The dog appears from the second house. After all the family members of Sardini have fled from the 4th house, the dog will turn into a giant monster and in order to pass the game one must defeat it.

The game also has a mode for two players. To turn it on, when the energy begins to end in Poltergeist, you should often press A and turn in different directions. When the energy is over, the screen will flash and another Poltergeist will appear, controlled from the second joystick. When this player has exhausted his energy, both Poltergeists will enter the dungeon and collect energy together. And who will pick it up first, he will go scare the family.

To move between houses (or game levels) at the first level, you need to move into the grandfather clock in the dining room and press B + C + C + B + A. After leaving the clock, you will have 15,000 points and you will be in the second house. In the second house, enter the room for the Jacuzzi and press C + C + C + B - the hero will receive 15,000 points and will be in the third house. In the third house you need to move into the garbage tank, which is in the garage and press B + C + B + B + A - 45 000 points and the final fourth mansion.
‹
›
Home
View web version