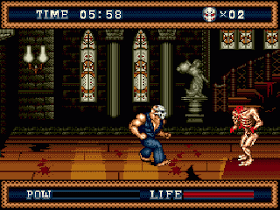 Genre: Action
Perspective: Side view
Visual: 2D scrolling
Gameplay: Beat 'em up / Brawler
Narrative: Horror
Published by: Namco Hometek Inc.
Developed by: Now Production Co.
Released: 1993
Platform: SEGA Genesis / Mega Drive
Splatter House 3 - the logical conclusion of the second part of the series, not only, and not so much plot, as in the graphic, sound, and other plans. It's easy to see that the idea has been brought to an end, and now we have a perfectly balanced game (unlike the second part, which in principle turned out to be not so bad, but which is hopelessly losing to today's hero of this article).
Graphically, the game engine has not changed much for the year that has passed since the release of the second part. There are cosmetic changes like that: the details of the monsters with which we have to fight are slightly improved, the levels began to look painted, and finally, the picture-animation (of which in the second part there was nothing-nothing) replaced digitized photos for which the real actors posed .
Sound, music and management are performed at a good level, especially music: amazingly creates an atmosphere, playing under this becomes really scary.
Management in the game is made intuitively clear that for an arcade rpg it is very important.
Rick - in one fell swoop, one hundred monsters ubivahum.
The plot of the game may not pretend to be an award in the best scenario for the console game, but it is deeply developed (for the arcade in any case).
Our old friend, Rick, is deprived at once of his son and wife. The spiteful demon kidnaps them and sharpens them in the familiar part of us - the House of Terror. This disgrace Rick could not stand, and went to rescue his relatives. In this he is helped by his favorite mask a-la "Jason", in which, moreover, the devilish spirit came into being. Now Rick was able to turn into a huge bugaya, possessing demonic abilities. This chip obviously went to the game for good.
The gameplay is interesting and captures from the first to the last minutes. Although, in my opinion, the replayability of the game is close to zero. Not everyone who likes it will go through it again, or even two.
Of the minuses I can note only a low replayability, and, perhaps, that some players may have problems with a couple of game bosses.
And in the end - evaluation. I want to make a little reservation: the ratings of the game are lower than those put in the second issue of the magazine Arsenot, the game Splatter House 2. And at the beginning of my article I noted that the third part was better than its predecessor. So what's the deal? The answer is simple and trivial: my colleague, I think, did not quite objectively assess the game, whether because he liked it or whether there was some other reason. I do not intend to blame him for that, because bias is inherent in any author who writes articles, and there is nothing terrible about this (for your humble servant, bias also sometimes no-no, but skips). I personally really like the third part of the House of Horrors, both on the background of the second part, and against the background of other games of the genre. But as for the assessments, I remain calm and put them objectively.