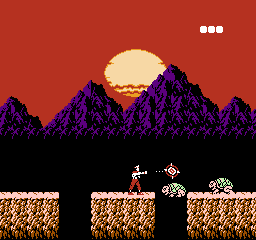 Genre: Action
Perspective: Side view, Top-down
Visual: 2D scrolling
Gameplay: Metroidvania, Platform
Setting: Fantasy
Published by: Tecmo
Developed by: Tecmo
Released: 1987
Platform: Nintendo (NES)
The game is a platformer with an admixture of Action-RPG elements, where the player acts as a "Legendary Warrior", who fights numerous enemies. The main feature of the game is the weapon used by the protagonist called "Diskarmor" - a shield with a long chain.
Here is how the game was described on the site of the translation group: Masterpiece: "Everyone who believes himself to be a true RPG fan should play in this game." Still, this is one of the progenitors of this genre! Graphic Normal! In general, the gameplay does not bother!
So, playing for the protagonist (who, incidentally, did not even have his own name in the Japanese version), you'll have to send him through some fantastic levels to eventually defeat the evil king Ligar "Ligar" and restore peace in the realm of Argool (Argool) , In the Japanese version of the game Argos. To achieve this goal, Rygar must visit the five gods who will give him the elements necessary to complete the game. You can independently choose the order of levels. But since there are some compulsory elements for collection (necessary for transition to new areas), the freedom of movement of the player is somewhat limited.
Interesting fact: "Ligar" (the last boss) is pronounced almost the same as Rygar, because in Japanese there is no difference between the letters "L" and "R", but the name is written with the hieroglyph "ra" in katakana. And the main character in the Japanese version is Senshi - Warrior.
‹
›
Home
View web version