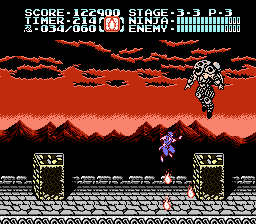 Genre: Action
Perspective: Side view
Visual: 2D scrolling
Gameplay: Arcade, Fighting, Platform
Published by: Tecmo
Developed by: Tecmo
Released: 1990
Platforms: Nintendo (NES), Super Nintendo (SNES)
This game is the sequel to Ninja Gaiden and continues its story. There is a new, possessed by power, enemy. Ryu Hayabusa tries to overcome him and save his beloved from danger. Our ninja once again uses an indispensable sword as a weapon, which is well owned. In terms of dynamics, atmosphere and complexity, the game is not inferior to the previous part, and even surpasses the schedule. There are more special opportunities. For example, together with you can run one or two invisible ninjas, which help to fight with enemies. Another hero not only clings to the walls, but can climb on them. The sequel can boast of new qualitatively traced levels. In addition to aggressive enemies, you are confronted with weather conditions (at some stages), which will visibly interfere with you.