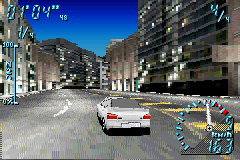 Genre: Racing / Driving
Perspective: Behind view
Gameplay: Arcade, Vehicle Simulator
Vehicular: Automobile, Street Racing
Published by: Electronic Arts
Developed by: Pocketeers
Released: 2003
Platform: Game Boy Advance (GBA)
EA once again proves that not all ports are equally useful for your health! If you still got this rum somewhere, or just want to download it, then I advise you to first read this review.
So, let's get started! I think almost everyone knows the amazing series of arcade racing Need for Speed, which has thousands of fans and fans. Initially, it was aimed at the PS2, but there were also its ports on other platforms. This article will look at the NFS-Underground port on the GBA.
The first thing that catches your eye is graphics. It is terrible here ... The road merges with the houses, the machines of opponents are sometimes simply impossible to see, and when the game says that you are going in the wrong direction, you simply feel a slight confusion.
Let's go further. The gameplay ... What can not be expected from the NFS developers is the inability to convey the sensations of speed, thank God, we did not wait for it - the ride is quite fast, but coupled with the striking graphics (the paragraph above), it's almost impossible to manage here . In the game you expect a large enough car park: Toyota Celica GT-S, Mitsubishi Eclipse GSX, Toyota Supra, Ford Focus ZX3, Subaru Impreza 2.5 RS, Nissan 350Z, Acura Integra Type-R, Acura RSX Type-S, Mitsubishi Lancer, Honda Civic Si Cope, WW Golf GTI 2.0L, Mazda RX 7, Nissan Sentra SE - R Spec V, Nissan Skyline R34 GTL. The car tuning possibilities are not rich enough: you can change the bumper (which is completely unnoticeable)), coloring, and apply one of several drawings to choose from.
The next item is the soundtrack to the game. This is the only thing that can please you: here you will hear almost all the themes you liked from the original NFSU on older platforms. The sound quality is also quite acceptable for GBA.
‹
›
Home
View web version