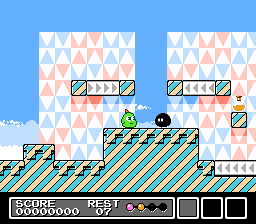 Genre: Action
Perspective: Side view
Perspective: 2D scrolling
Gameplay: Platform
Published by: Sun Electronics Corp.
Developed by: Sun Electronics Corp.
Released: 1992
Platform: Nintendo (NES)
In 2002, the game was ported to the PlayStation and was released as part of the "Memorial Series SunSoft Vol.6" collection, which also included the scrolling shooter "Super Spy Hunter".
The game does not have any text, and all scene scenes are described by animation. The story begins with the fact that one little girl receives a toy named Yumetaro as a birthday present (in the European version - Mr. Gimmick). She is so fond of a girl that she completely forgets about her other hobbies. All old toys, filled with a sense of envy, kidnap her into another dimension, inhabited by some toys. Yumetaro decides to save his mistress and goes looking for her in this bizarre world.
"Mr. Gimmick" is a classic scrolling platformer, divided into several levels, at the end of each of which we are waiting for battle with the boss. As a weapon, Yumetaro uses jumping stars that create the top of his head. In addition to defeating the enemies, the stars have several more functions: in particular, with their help, the character can manipulate various creatures, and can even jump on them and thus travel to remote hard-to-reach places. There is an inventory in which bombs, potions and fireballs accumulate.
The levels in the game are pretty short, but in each there is a secret place with magic items. If you skip secrets and fight with the "last" boss without magic items, eventually it turns out that the girl is still kidnapped. To completely complete the game and get the final ending, Yumetaro should find secrets at every level and not lose a single life. In this case, an additional secret level will be available with the new latest boss. Under all the conditions, we are shown another final cutscene in which Yumetaro saves the girl and returns with her to the real world.
After the release, the game had no commercial success outside of Japan and was not very popular, even despite the publication in Scandinavia. However, later, with the beginning of the era of emulation, gained fame in many regions of the world, and in certain circles became cult. In 1992, the July issue of the American magazine "Electronic Gaming Monthly" published a positive review, but it did not follow any sequels or sequels.
The game has excellent graphics, nice atmospheric music (quite unlike many NES / Famicom) and pretty juicy gameplay. Managing the main character does not cause any problems. And what a cool saver before the game! All would be well, if not that there are only 6 levels in the game. But, some of these six small adventures are quite long, and the complexity is not at all simple, so for the complete passage you will definitely have to try hard (especially difficult bosses, and in order to overcome the first of them, you will most likely have to Learn how to use the "Save State" emulator function). According to many users, "Mr. Gimmick" is one of the most underrated games for the 8-bit console from Nintendo, and some of them even consider it one of the best platformers of the system, in quality superior to Super Mario Bros. 3. A pretty loud statement, is not it? Try to play it yourself and decide for yourself: what is worthy of this product from "Sunsoft"!
‹
›
Home
View web version