The Magic of Scheherazade (NES) 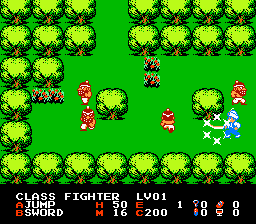 Genre: Action, Role-Playing (RPG)
Perspective: Top-down
Pacing: Turn-based
Setting: Fantasy
Published by: Culture Brain USA
Developed by: Culture Brain Inc.
Released: 1987
Platform: Nintendo (NES)
The game was innovative for its time, combining the elements of Action-adventure and RPG, and at the same time based on the famous Arabian tales (besides the main character in the process of moving moves in five different periods of time). The game has a unique combat system, combining simultaneously a single passage and cooperative turn-based combat. The game has a special mode in which two team members can pool their forces to perform special special powerful attacks.
So, you have to manage the hero - Isfa, the descendant of the great magician, who failed to protect the lands of Arabia from the evil Sabaron. As a result, the hero's memories are erased, and his beloved, Princess Scheherazade, is taken prisoner. Isfah must go through five great worlds to save the three sisters of Scheherazade, her father, and, finally, the princess herself.
During the passage, eleven assistants are ready to join your team and help in the fight against Sabaron. After saving the sisters and father of the princess, the hero will have to face the demon Goragora, whom an evil magician will release to suppress your desire to go to the end.
And now, after all the trials, defeating all evil spirits and the main villain Sabaron, Isfah learns this truth: it turns out that the princess was not kidnapped at all, but was always with the hero in the guise of his assistant Coronya! After revealing this grandiose deceit, the hero with a calm soul goes to the Dark World and destroys Goragoras, bringing peace to the lands of his ancestors.
An interesting story, is not it? Do not you want to live it all with the main character from beginning to end? Then go ahead, dare, in front of you - one of the best RPG for NES!
‹
›
Home
View web version