Eric and the Floaters (MSX) 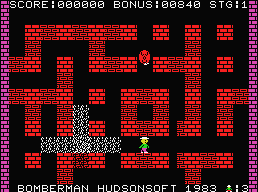 Genre: Action
Perspective: Top-down
Visual: Fixed / Flip-screen
Gameplay: Arcade
Interface: Direct Control
Published by: Al Alamiah
Developed by: Hudson Soft Company
Released: 1984
Platform: MSX
Clone Bomberman, and not the best.
The remains of the treasures of the lost civilization are hidden under the walls of brick lanes. Eric hopes to find them by blowing up walls with bombs. But in the alleys there is a danger - bubbles, deadly inhabitants of the ancient system. They will kill Eric if they touch him. He must destroy them with bombs.
For every destroyed bubble, 10 or 200 points are scored randomly. Treasures, pulled from under bombed walls, are estimated from 160 to 1260 points.
The game has 12 levels.
Bubbles are prone to bouts of anger. Usually they are purple and drift near the walls. But when they turn red, they start hunting for Eric. More carefully arrange bombs,
Until there is no danger. Do not stay long at each level, or you will lose bonus points.
‹
›
Home
View web version