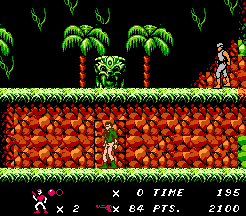 Genre: Action
Perspective: Side view
Gameplay: Platform
Narrative: Spy / Espionage
Published by: Capcom U.S.A.
Developed by: Capcom Co.
Released: 1990
Platform: Nintendo (NES)
The game describes the confrontation of special operational forces to drug dealers from South America.
The protagonist of the game is an agent of Special Forces Kenny Smith, whose code name is "Viper". He was ordered to investigate a large narcotic syndicate, which covers the whole of South America. The purpose of our agent is to save the captured agents in each of the seven enemy shelters and uncover the secret of the main mastermind of the syndicate.
Gameplay game is very similar to the arcade hit of the company "Namco" in 1986 release "Rolling Thunder". As in that game, here our agent can jump up and down between different platform levels, and also enter the doors to receive bonuses, rescue hostages or to avoid enemies. A character can be equipped with one or two types of weapons - a standard pistol or a semi-automatic machine gun. Bonuses include: extra ammo for any weapon, extra health, time, and extra lives. Unlike the "Rolling Thunder", you can shoot here even during jumps, and also change the direction in the air.
Another difference between "Rolling Thunder" and "Code Name: Viper" is the additional emphasis in the latter on rescuing the hostages. During the first seven stages, it will be necessary to save the captured citizens who are behind certain doors. However, if we are late with help, we will find only their remains behind the doors. To perform each of the first seven levels, you need to save the captured commandos, which will provide the hero with the necessary number of grenades for an explosion blocking the exit from the obstacle level. In the game a total of eight stages, and three levels of difficulty are the choice.
The strength and pattern of behavior of ordinary enemy soldiers, which we will encounter in the game, is determined by the color of their clothes. In addition to them, we are waiting for a number of other opponents, such as snipers, divers and even maniacs.