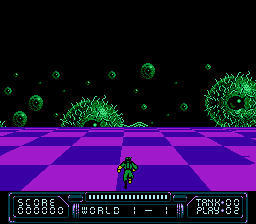 Genre: Action
Perspective: Behind view
Gameplay: Arcade
Setting: Sci-Fi / Futuristic
Published by: Acclaim Entertainment
Developed by: Square Co.
Released: 1987
Platform: Nintendo (NES)
In a world far removed from us, known as the Solar System No. 517, the evil Grax and his henchmen terrorize the inhabitants of nine planets. People need a hero who will save them from this evil spirits. And such a daredevil is - fearless WorldRunner. He challenges the forces of evil and travels through all nine worlds to give a light to Grax and his assistants and to free the entire System from fear and unrest.
This game is one of the most graphically interesting for the console NES (keep in mind that it was released in 1987!). The prefix "3D" in the title is not accidental: on the screen there are pseudo-3D graphics. And in the game there is a mode for standard stereo glasses, with them it looks 100% 3D!
Each of the nine worlds in the game is divided into several parts. Most of the game time will need to escape, sometimes jumping over the precipices and jumping over enemies, and collect bonuses. At the end of the game we are waiting for the chief boss. In this regard, our hero gets a gun, and between them begins a struggle for life and death.
The original version of the game originally came out on the Famicom Disk System, and was later ported to NES.
‹
›
Home
View web version