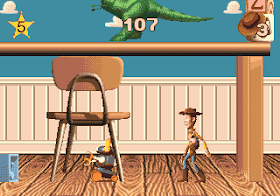 Genre: Action
Perspective: Behind view, Side view
Visual: 2D scrolling
Gameplay: Platform
Published by: Disney Interactive
Developed by: Travellers Tales (UK) Ltd.
Released: 1996
Platforms: SEGA Genesis / Mega Drive, Super Nintendo (SNES)
A wonderful game based on the cartoon Toy Story. The creators above it clearly worked: the graphics are drawn brilliantly, the sound is also excellent, and how many different game modes here! You have to play for a toy - cowboy Woody, who has always been and is the most favorite toy of a boy named Andy. But one day on the birthday of Andy gave a new toy - space ranger Buzz. Woody gradually fell into the background, and he was very sad to look at how Andy played with Buzz, and with him he did not play at all. And then Woody decided to get rid of Buzz and threw him out the window. Upon learning of this, the other toys decided to crack down on Woody. Woody realized that he made a big mistake and ran after Buzz, but he already disappeared in the car "Planet Pizza". In general, the plot unfolds not weakly. The game has a lot of different game modes: in the beginning you will have to run around the room, helping the toys, also on some levels you have to drive on a toy car with a view from above and from behind, you will also need to find 8 toys in a pseudo-3D level , You have to hide under a glass from the cola cautiously moving forward, you have yet to escape from the dog of the bad boy Sid, you will fly through the air on the wings of Buzz, and, of course, fight bosses at the end of some levels. In some places, the game is not easy, but it's more interesting. In general, the game - at 5!

Complete the first stage of the game; Then, at the beginning of the second stage ("Red Alert!") You must collect three stars above the box with toys. Then go to the right and collect four more stars (total seven); If you accidentally collect more than seven stars, then the trick will not work. After collecting seven stars, jump into the box with toys; Press and hold DOWN on the direction key for six seconds. You will see how the health star of Woody will start spinning; This means that now you are invincible until the end of the game.

Jump to the next stage

At the beginning of the game, wait for the title screen "Toy Story" to appear on which Woody stared at Buzz Lajtera and the word "PRESS START" flashed. Press the joystick A, B, RIGHT, A, C, A, DOWN, A, B, RIGHT, A ("abracadabra"). You will hear Woody scream: "Hot! Hot! Hot! "- in confirmation of the correctness of the code. Now start the game; When you want to jump to the next stage, just press START (pause) and A - and instantly end up at the end of the stage.
‹
›
Home
View web version