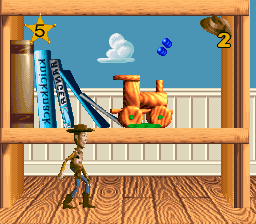 Genre: Action
Perspective: Behind view, Side view
Visual: 2D scrolling
Gameplay: Platform
Published by: Disney Interactive
Developed by: Travellers Tales (UK) Ltd.
Released: 1995
Platforms: Super Nintendo (SNES), SEGA Genesis / Mega Drive
Great game based on the movie Toy Story. The creators of the above it clearly worked: graphics traced excellent, the sound is also excellent, and how many are different game modes! You have to play for a toy - cowboy Woody, who has always been and is the favorite toy boy named Andy. But one day, a birthday, Andy gave a new toy - Space Ranger Buzz. Woody gradually withdrew into the background, and it was very sad to see how Andy played with Buzz, and with him he did not play. And Woody decided to get rid of Buzz and threw him out the window. On hearing this, the other toys Woody decided to crack down. Woody realized that made a big mistake and ran for Buzz, but he had already fled in a car "Pizza Planet". In general, the plot unfolds not weak. The game has a lot of different game modes: in the beginning you'll have to run around the room, helping to toys, and on some levels, you have to drive a toy car with a view from above and behind, you also have to find the 8 toys in a pseudo-3D-level shnom You have to hide under a glass of cola cautiously moving forward, you still have to get away from the dog's bad boy Sid, you'll be flying through the air on the wings of Buzz, and, of course, to fight with the bosses at the end of some levels. Mostly the game is pretty easy, but so interesting.
‹
›
Home
View web version