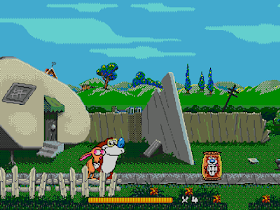 Genre: Action
Perspective: Side view
Visual: 2D scrolling
Gameplay: Platform
Published by: SEGA of America
Developed by: BlueSky Software
Released: 1993
Platform: SEGA Genesis / Mega Drive
Help Ren and Stimpy find all the lost parts of Mutate-o-Matic, the latest invention of Stimpy. The game is made based on the cartoon, of course it has a wonderful cartoon graphics, good gameplay, so it will be nice to play in it. This is the only game in the series that came out for Sega.Playing the Ren & Stimpy Show cartoon, which shows on the channel Nickelodeon .... You can play the funny game together and one for anyone you want either for Ren or for Stimpy ... Ren: Dog Chihuahua, Stimpy: Stupid Cat. So about the game Stimpy Once again invented a machine for feeding Food and Ren did not believe and Stimpi wanted to show and overdone in the power and the rooms were rattled details that must be collected during the game. In the end, it is necessary to turn it off to stop the mutation. In Game 6, Levels are not easy to play.