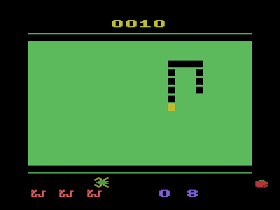 Genre: Action
Perspective: Top-down
Visual: Fixed / Flip-screen
Gameplay: Arcade
Published by: Spectravision
Developed by: Spectravision
Released: 1982
Platform: Atari 2600
The player controls a long, thin creature resembling a snake that creeps along a plane (usually bounded by walls), collecting food (or other objects), avoiding collision with its own tail and the edges of the playing field. In some cases, there are additional obstacles on the field. Every time a snake eats a piece of food, it becomes longer, which gradually complicates the game. The player controls the direction of movement of the snake's head (usually 4 directions: up, down, left, right), and the tail of the snake moves next. The player can not stop the movement of the snake.
‹
›
Home
View web version