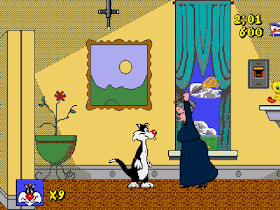 Genre: Action
Perspective: Side view
Visual: 2D scrolling
Gameplay: Platform, Puzzle elements
Published by: Time Warner Interactive
Developed by: Alexandria, TecMagik Entertainment Ltd.
Released: 1994
Platform: SEGA Genesis / Mega Drive
The plot as such does not exist in the game, as in the Looney Tunes cartoon series: the cat catches a bird, on which the storyline is limited. In the game plan, Sylvester & Tweety is a platformer with horizontal and vertical scrolling, that is, unlike most platformers, such as Mario games, where the "height" of game locations is limited mainly by 1-2 screens, in the game Sylvester & Tweety in Cagey Capers "height" of locations is almost equal to their "length".
Characters and locations are decorated in the style of the cartoons on which the game is based. Graphically, the levels are constructed using 2D graphics; As in most platformers, levels and characters are performed using tile and sprite graphics, respectively.
The goal of the game is to help the main character (cat Sylvester) catch the bird Tweety, for which it is necessary to chase after her for seven game levels.

Useful items collected on levels are available in the pause menu.
Bone and Fish - the object allows you to distract the enemy (dog or cat, and in the laboratory - a mechanical dog), you just need to throw it into the distance.
Boxer gloves - temporarily cut down enemies (dog or cat).
Hammer - by the method of use is similar to boxing gloves, designed to neutralize a mechanical dog.
Umbrella - the character gets the ability to climb from a height without losing health.
Pogo stik - jumping, you can jump higher.
Alarm - will cancel the playing time.
Canning - restores health by 50%.
Sylvester's image is an extra life.
The superhero costume is temporary invulnerability.
Serum "A" - is available only at levels where Tweety becomes a mutant: the serum temporarily returns to the bird a normal appearance.
In addition, Sylvester can use binoculars to locate Tweety. At the levels there are also objects that affect the number of points: bags with the image of a cat's face (1000 points), bags without an image (5000 points) and toy mice (10,000 points).

The number of enemies at the levels depends on the complexity of the game - the higher it is, the more enemies.
Dog, Cat and Mechanical dog are common enemies, identical in behavior. When approaching the character try to hit him (Cat and Dog) or scare barking (Mechanical dog). There are two ways to eliminate them - throw an object (bone or fish) into the distance or beat them, using boxing gloves or a hammer. The dog appears in 1, 2, 3 levels, the Cat - in 4 and 7 levels, the Mechanical dog - in 5 and 6 levels. These opponents are able to pursue the character. At the level of Domestic Devils 2 from the dog Hector you can hide in a special place.
Grandma - approaching the character, beats him with a broom on the head. The only way to avoid it is to hide in special places (for example, in a lamp or a cat's cot). Appears in 1, 3 and 7 level.
Kangaroo - in fact, not an enemy, pushes Sylvester's cat up, thereby tossing the character higher. Appears in 3 and 7 level.
Tweety Mutant - after drinking a mutagen, the bird turns into a huge monster, which can not be hidden (as well as Tweety in the "normal state", the monster is able to fly through the partitions and "floors" of the levels). The only way to neutralize the mutated Tweety is to throw Serum "A" into it, causing the monster to turn back into a bird for a while. If the monster still manages to swallow Sylvester, one must try to get out as soon as possible, otherwise one can lose one life; If the hero still loses his life, the bird again acquires a normal appearance. Appears in 5 and 6 level.
‹
›
Home
View web version