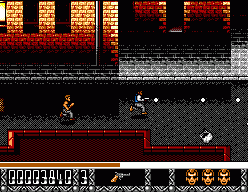 Genre: Action
Perspective: Bird's-eye view
Visual: 2D scrolling
Setting: Sci-Fi / Futuristic
Published by: Acclaim Entertainment
Developed by: Teeny Weeny Games
Released: 1992
Platforms: SEGA Master System, SEGA Genesis / Mega Drive
The game is based on the movie "Predator 2". You are a policeman, your task is to destroy the raging crime on the street. It seems that the enemies have captured part of the city, because they come out almost from every house, everywhere snipers shoot from the windows and in addition the enemies even sat down in the sewers. On the road is piled a bunch of weapons and sometimes there are three points from the laser sight of a predator. The game is cool, you have to play.
‹
›
Home
View web version