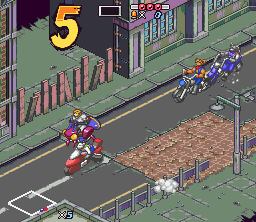 Genre: Racing / Driving
Visual: Isometric
Setting: Sci-Fi / Futuristic
Published by: Konami (America)
Developed by: Konami Co.
Released: 1994
Platform: Super Nintendo (SNES)
The game is based on the homonymous animated series created by Rick Ungar, which tells of the adventures of three Martian anthropomorphic motorcyclists who came to Earth.
The only feature that unites him to the series, however, is the characters and settings, as the game is simply a series of motor racing. The game is made sparkling by the weapons and the improprieties that can be used during the various races to hinder the opponents and try to take advantage. Each of the six characters that can be selected by the player also have different characteristics that make them different from one another to driving (from the maximum peak speed, to the different way of steering, to acceleration, to custom weapons).

In the series is the leader of the mice (the "good" of the cartoon). In the video game it is equipped with a motorcycle that is not particularly good looking but not bad either, with good acceleration, good speed and good grip. This feature makes it great for beginners, but not particularly fun for the most experienced players. His special weapon is the Tornado Shot, an orange bullet that can be fired forward to try to hit the opponent in front, or possibly slid off the back of the bike, in the hope that some car following it will stumble on it.

It is one of the three mice. The color of the leather is white and his bike is red. It is the fastest bike in the game, but the best in grip and the second in terms of acceleration. It is particularly suitable for tracks with many straights, as the special weapon, the Shooting Star, is not aimed at damaging the opponent and consists in the possibility of making a small jump with the motorcycle that allows it to reach a peak of extremely high speed, unattainable by other competitors. This ploy fills Vinnie's speed defect. Like Throttle, however, it is possible to miss a red bullet from the back of the bike.

This is the third and final mouse. In the Italian series it is known as Pistone. Dark gray in color, with a black bandage on the eye, it has a good bike from the speed point of view, discreet in grip but lacking in acceleration. It is however equipped with the most powerful weapon among the six competitors, the Bionic Charge, which consists in the possibility of lashing violently with one's own bike against an opposing vehicle, depriving it of three lives (two in the Battle Race mode). The Bionic Charge can also be used during acceleration, if necessary, to regain speed. It is almost unbeatable in the Battle Race mode, where the goal is solely to destroy the opponents. He too, however, has the possibility of leaving a bullet from the back of the bike.

Lawrence Limburger is the leader of the "villains", an alien who, once he arrived on Earth, took on the appearance of an obese human being. In the game it is equipped with a kind of car without a canopy with anti-gravitational purple levitation. Without taking into account the various special weapons or other stratagems, Limburger is equipped with the second fastest car in the game, as well as the one with the best acceleration, managing to reach the maximum speed peak already at the start. In fact, this feature allows him to always be in the lead in the very first stages of the race, regardless of the starting position, with rare exceptions. On the other hand it is equipped with an extremely difficult to control steering system, as the car can be turned 360 degrees very quickly, which makes Limburger the worst in the grip phase. Its special weapon, the Plasma Gun, consists of a sort of white-colored bionic ray that can be fired in any direction.
When an opponent uses an earthquake, Limburger's vehicle stops completely.

Grease Pit is one of Limburger 'henchmen. Together with Karbunkle, he is one of the two human beings present in the game. The name ("fat pit") derives from his job as a mechanic, due to which he is always dirty with oil. Drive a sort of three-wheeled Harley Davidson. In all likelihood it is the most difficult car to drive, therefore suitable for an experienced player. It has the best top speed of the game, but it has the worst acceleration of all, as well as a bad grip that causes it many problems, especially on the sea. Its only possibility to steer without losing speed is in fact to slam against the wall before the curve, therefore, in the absence of walls, Grease Pit has great difficulties in this fundamental. His special weapon is a black bullet filled with oil that floods the victim who is hit with black viscous material, blocking his run for a few moments. The bullet can also be dropped back.

Karbunkle is the other human being in the game, as well as Grease Pit. This is a mad scientist in Limburger's service, but not as evil as these. The only reason he stays with the evil alien is because this allows him to do his research, which Karbunkle regularly offers to Limburger. His car is the most curious of the game, consisting of a kind of yellow and red mechanical spider. It is a slow car, second only to Vinnie's, but on the other hand it has good acceleration and excellent grip. It is also equipped with a curious steering mechanism consisting in the extraction of a chain equipped with a metallic ball full of spikes which, if properly extracted at the exact moment of the curve, sticks to the wall and allows the mechanical spider to make the steering to a speed that no other car in the game could reach in that situation. The special weapon consists of a bullet (which can be fired or left behind) which, as soon as it comes into contact with an opponent, turns it into an unidentified little monster that boils down to walking at a walking pace for a few moments , to then resume its normal form.
‹
›
Home
View web version