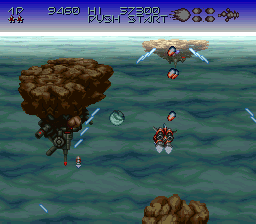 Genre: Action
Perspective: 3rd-person, Side view, Top-down
Art: Anime / Manga
Gameplay: Shooter
Setting: Sci-Fi / Futuristic
Published by: Konami
Developed by: Konami Co.
Released: 1992
Platform: Super Nintendo (SNES)
One of the best classic games on Super Nintendo. She came out in the early stages of the existence of Snes and immediately won people's hearts. All the leading editions of that time gave her the highest marks. The thing is that Konami perfectly adjusted the game to the technical capabilities of the console. In different levels of the game, vertical and horizontal scrolling is used. At the time, it was noted that an unusual perspective in levels with a top view requires addiction. To some extent, they were right, because for that period of time, it was very unusual. But despite the fact that the experience gives a game during the flight of the ship through the clouds and maneuvering between asteroids can not be compared to anything else.Spatial piloting of our aircraft, aimed at defeating the enemy, was the main task of this scrolling shooter, and she coped with this with high implementation.The game used the currently available Mode 7 image mode, implemented for this magnificent console. The effect of pseudo-three-dimensionality perfectly adjusted to the mode of flying-shooters, turning it into one of the best hits of its time. Many games even duplicated such an unusual idea, and this effect became a distinctive highlight of Super Nintendo, inaccessible at that time to other systems. Many hoped for a continuation, promised this and Konami in the game, but, unfortunately, it is not there so far. However, its visual effects, unusual weapon system and musical accompaniment made the game one of the popular scroll shooters for SNES, which still excites the minds of the old gamers. After about a dozen years, it was reissued on the Nintendo Wii in Virtual Console service and after this long period of time, the game again won the highest ratings on the advanced gaming sites and publications.The plot of the game develops in the fictional solar system Illis. It is invaded by the forces of the empire of the alien, known as the Armada of Destruction, and captures the planets of the system, including Earth-like planet Corlis ("Mother" in the Japanese version). They incinerate all people, and your hero is one of the few survivors looking for revenge, viewing their medallion as a reminder of a lost family. With the help of what means to achieve revenge, he does not think for a long time, becoming a volunteer for maneuvering special flying equipment. As the last hope in battle against the forces of the invaders, the D117B Axelay warship is sent with our hero, who must restore his lost weapons and stop the invasion.The action takes place on a cloud-covered planet Cumuluses, in a space colony of Tralieb, a densely populated Urbanite planet, the water planet Cavern and Lava Planet. Before each level, you can pick up weapons suitable for the next mission up to three types. With the successful attack of the Axelay ship by numerous rivals or unsuccessful pilots, one of the weapons is lost. In total, the ship will withstand three hits or collisions. The rest of the forces in the remaining level path must be effectively maneuvered, showing the wonders of aerobatics and how long it is possible to hold out, as long as possible, in order to liberate the earth from the doomed state on its own.
‹
›
Home
View web version