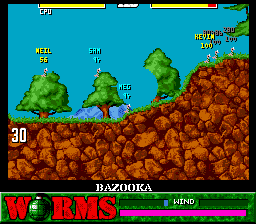 Genre: Strategy / Tactics
Perspective: Side view
Visual: 2D scrolling
Pacing: Turn-based
Gameplay: Artillery
Interface: Direct Control, Multiple Units / Characters Control
Narrative: Comedy, War
Published by: Ocean Software Ltd.
Developed by: Team17 Software Limited
Released: 1996
Platforms: Super Nintendo (SNES), Atari Jaguar, DOS, SEGA Genesis / Mega Drive
Action, drive, graphics - these descriptions are often featured in Super Nintendo games, but today we are talking about a game that is extremely difficult to give at least one term from the list. But we can safely say - the gameplay laid down by the developers, will not leave anyone indifferent. The curtain rises, and we see .... Worms?!? Yes, yes, the game, which became the hero of today's review, is called "Worms".
Those who for some unimaginable reasons are not familiar with the series, you can tell about the plot. A group of aggressively-minded worms leads a gangster disassembly with another equally aggressive formation. As well as it is necessary to good zavarushke, in a course there are all improvised means, the weapon and various skills of worms, both fighting, and philosophical. Disassembly is conducted on a number of maps, representing more beautiful scenery, rather than a place for shooting between opponents. The overall picture seems very funny and unconstrained, if not comical, partly resembling the game Cannon Fodder, where the main idea of ​​"killing a squad" is beaten through a bunch of ridiculous jokes and the charisma of the main characters. But it's worth the first worm to launch a game shot from the rocket launcher, as everything becomes serious at once, and the time of jokes briefly departs for a second or even a third plan.
What was the basis of the developers of Team17, releasing the game, remains a mystery. Personally, my Worms cause a feeling of nostalgia for the old computer game Scorched Earth (Scorch in the common people), and I perceive "worms" as a kind of continuation of that wonderful game. Anyway, but the glory of Worms was and is at times more than that of Scorch; the game was ported to everything that is possible, and released a huge number of sequels, even in 3d (but on our subjective view, the true worms only in 2d). The Super Nintendo version is nothing more than a port released in 1996 and not very popular due to stronger ports on other platforms (on the same PlayStation port Worms looks many times better). On the SNES game was released only in Europe and in a fairly modest number of copies.
As we said at the very beginning, the main plus of the game is its atmosphere and gameplay. Sound, graphics and other evaluation criteria are far from secondary. At the disposal of the player is a detachment of worms, each of which has a huge arsenal of means of attack. But do not forget that the enemy (artificial intelligence or fellow man) has the same thing, and the art comes to the fore to fight. In addition to the typical automata, pistols, RPGs and other "babahalok" worms have more exotic means of attack (rope, dynamite), but that's not all: worms can drill, gnaw, push and beat anything that comes to hand. Often it is much more advantageous to push the enemy into an inconvenient crater than to attempt a shot. The lives of each hero is quite a lot and even the exact hit will take, at best, half the lives. Add here various weather conditions, such as wind and the need to calculate the strength of the shot. In the heat of the fight, the third force drops additional boxes with special / strikes and cartridges. The rule is simple - who first had time, and provisions. In general, the art of war and combat is here in the first place, strategists and fans of complex multi-pass combinations will be delighted.
Something else to highlight in the Worms series is probably possible, but it certainly will not be a game chip or its strong side. All the charm is in the strategy and tactics of combat, and if this is easy for you, try to fight in unequal compositions. This is much more complicated than it seems, the ruthless random can put the player close to the opponent and give the first move to the enemy, I will not continue, the worm will survive or the case or something (someone else) will decide.
‹
›
Home
View web version