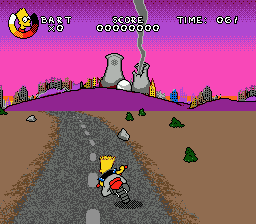 Genre: Action
Perspective: Behind view, Side view
Gameplay: Platform
Setting: Fantasy
Published by: Acclaim Entertainment Ltd.
Developed by: Sculptured Software
Released: 1994
Platforms: SEGA Genesis / Mega Drive, Super Nintendo (SNES)
Bart Simpson walks through an exhibition of "scientific" projects at his school, stumbles upon a strange machine, with which he can get into one of several virtual worlds that he will have to go through and participate in a variety of activities, such as , For example, a racer in the future, or throwing a tomato in a real or amusing Stone Age monster.

In total there are 6 virtual worlds (levels) in the game. All of them are different, like the gameplay, and management, and the overall goal of the protagonist. The format of the worlds in general is similar to the game "Bart's Nightmare", however, in the game there is no so-called center of the world, i.e. The player can get to this or that world, only completely stopping Bart, and he will leave it only when he passes the whole world to the end, or completely exhausted all life. On the selection screen of the worlds, at the very top there is also a scoreboard with a sequel (in the form of ice cream), also in the same window and selecting it (the image of "Merry Roger").
You can also play in every world by choosing the "Practice Area" menu.

Bart turns into a funny monster, in the Stone Age, where he will meet with all the ancestors of the whole Springfield. In the beginning, the action takes place at the foot of the mountain, but the course of the game, all the accompanying obstacles, as well as Bart's goal takes place in the caves. As a weapon, the hero uses his tail, as well as growling (which resembles a "child's scream"), in addition he can jump on his enemies. As the boss stands Mr. Charles Montgomery Burns and his assistant Waylon Smithers, and later - his father, Homer Simpson and bartender Mo.

Seeing in the window, a van with ice cream, little Bart goes on a "hunt". Moving through the trees, after the bars, to dry the laundry, the hero begins moving in the beginning on balloons, and then in the stroller. Against him are two more hooligans in the "cradles": Jimbo Jones and Kerni (the same person will appear in the world of "Post-Apocalypse"). After small jumps, over the balls, Bart enters the circus. Here, his task is to move on the crossbeams, flying through the rings, jumping on the trampoline, jump into the gun, which will launch the "shallow" in the desired goal. The main task of the player, not to let Bart fall to the ground, otherwise the player instantly loses a lifetime. It is noteworthy, but only at this level, there is an opportunity to gain many lives: before going to the circus, leaping to the left, along the tree trunks, two lives are immediately available to the hero.

Bart is now in the image of one of the escaped pigs, where he has to save all the "pig brothers". Clowns and corporate thugs act as enemies. After the victory over the owners of the plant, the end of the level is possible only after the complete release of all captive pigs.

Bart travels through a pipe system, in an aquapark, along with all the residents of the city, while they are obstacles, as well as inconvenience delivers various garbage, which sometimes becomes useful (for example, a surfboard). Although the path is shown on the screen, in reality the hero needs to go through several routes. At the corners, there are two variants, the final one that can be right, but at the same time, it is possible to be thrown back, to fall into the mouth of the Lion (which may as well spit out Bart, that is salvation, but also swallow), or fall into the abyss .

The hero, before shooting, hid in shelter and stocked up with tomatoes, must shoot all his classmates, without touching the director (although if he stops and hang his boots, there is an opportunity to get into his "soft spot"), the teacher, Willie and the sheriff. As the field and the distance for the bombardment, the main school alley serves. After doing the same procedure again, using the eggs.

After the accident at the nuclear power plant, the hero goes on a trip to the Post-Apocalyptic Springfield, on a motorcycle, the path itself lies through a string of obstacles 10 miles long, along the way it is hindered by the grown-up hooligans Jimbo Jones and Kearney, Bart can kick them off or toss them in They are balls with water, however, they come again with a new mile.The school bus is also hampered, which is not so easy to go around except for it: squirrels and bones of animals.
‹
›
Home
View web version