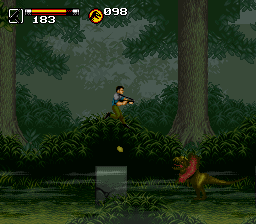 Genre: Action
Perspective: Side view
Gameplay: Platform, Shooter
Published by: Ocean of America
Developed by: Ocean Software Ltd.
Released: 1994
Platform: Super Nintendo (SNES)
In Jurassic Park 2: The Chaos Continues, a player can select any level from the list and play them in any order, but to complete the whole stage and advance on the story line, you need to play from the very beginning. During the game, three types of weapons are available: rifles, a machine gun and a shotgun. Also for defense in the game you can use electric shock, tranquilizers and gas grenades. Deadly weapons are designed primarily to repel attacks by people from Biosyn, while a non-lethal weapon is aimed at temporary damage to dinosaurs. In this case, if the number of killed dinosaurs is large, then the game will be over.