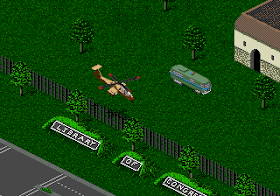 Genre: Action
Perspective: Bird's-eye view
Visual: Isometric
Vehicular: Flight / Aviation, Helicopter, Hovercraft, Motorcycle
Published by: Electronic Arts
Developed by: High Score Productions
Released: 1993
Platforms: SEGA Genesis / Mega Drive, DOS
This is the legendary game. At one time everything was played in it. This game can be called a kind of simulator of military operations on a helicopter, and not only on it. The game is a continuation of the game Desert Strike: Return to the Gulf. You have to act as a helicopter pilot. Which is sent to a difficult task to save Washington from the terrorists attack, and then destroy the terrorists themselves. Two drug lords joined forces, and they want to take revenge on the United States. One of them avenges the United States of America for the death of his father, and the second wants that the US security services should not prevent him from selling drugs. You must stop this frenzy. A truly revolutionary game for Sega MegaDrive. Fine digitized 3D models of buildings, equipment and other objects. You have several types of weapons. Which in the course of the game you can replenish. You will also need to replenish the fuel reserves, that is, refuel. In some missions, you will have the opportunity to change the mode of transport. For example, to change from a helicopter to a fighter or, for transport on an air cushion, etc. You have to release hostages, destroy various buildings and objects and many other interesting things.

Perform missions only in the order that the computer offers you. Beware of places, approaching to which the on-board computer issues a warning "Danger Zone".
Closely monitor the main indicators: fuel, life energy, ammunition. In advance, care must be taken to find the locations of the fuel, so that there will be no surprises.
If you feel that two opponents attacking you at the same time, you will still be knocked down, then hover over one of them, guided by the shadow. And when the second enemy knocks you down, you fall on what's under you, and blow it up. You can also do this when you run out of fuel, and before refueling it is far away (by this method you will save cartridges).

Terrorists encroached on the property of the American republic - monuments of national culture. A little more and American freedom will remain without a statue. Only you and your combat helicopter from all the vaunted US Army are able to prevent this nightmare. However, I advise you not to hide yourself from enemy shells behind monuments, buildings, etc., since the terrorists are so fierce that they will shoot at the object you are hiding behind, until they smash you, and the buildings, among other things, not iron. (Do not worry, in another mission, on the contrary, you yourself practice in the destruction of buildings). Seeing your power and agility, the enemy used a technical novelty, sending cars to defenseless houses, stuffed with explosives on the hood. And what's rotten, that if the bandits manage to destroy at least one building, the American homeland will not forgive you this.
However, real estate has to be left for a while: the agent of the CIA, Agbar, rescued by you during the next mission, tells the terrible news that the President of the United States is in danger himself. The safest place for the President is the White House. This is where you must accompany the first face of America. The President's car is defenseless, and on your way there will be a bunch of equipment and fighters, and therefore advice:
Before directing the car, clean all nearest roads to the White House from enemies. And do not drive, you are not at the rally in Monaco, and then the car disappears from sight, stops and does not go on, will have to go back.

The actions of this stage unfold on the water, and also, in part, on land (more correctly, on the coast and islands). From the helicopter will have to get down. But not for long. Come to the island, on which there is an airslitter, perebeyte guard, Glisser your! Move to it, putting the helicopter on blinking circles.
It is necessary to take away the nuclear substance stolen by terrorists with the purpose of manufacturing an atomic bomb. This substance is hidden in several suitcases, transported by boats and cars. Thunder only those boats and cars that flash points on the map and when you find your helicopter they open fire on him, trying to get away from you. If you blew up the right vehicle, it will leave you a suitcase, which you take, standing next to it.
And then, on your head, you save the pilot with the F-15, who will tell you that he has spotted several enemy submarines. Apparently, they also pinpointed it. I'll have to fight with the submarines, MISSED to the surface. It is better to destroy a boat by placing two mines (button "A") on its way.

Ba! Yes, that's where terrorism comes from! Training camps of bandits! Destroy it !! Take the "green beret" to help you, he will put things in order in the enemy camp, without destroying it. This is very important, otherwise everything will have to start again. And, in general, a little trick does not hurt. Help the enemy (!) Fix the telephone line. Do not worry, it's only in your best interest. Now the enemy will be able to send a message, and you will intercept it! Later, when, under the crossfire of the enemy, you destroy the barrack and capture the enemy officers, you famously try to extract the contents of the telephone message sent from your, among other things, help.

Darkness enveloped the jungle. But you have lynx eyes, tiger claws and HYDRAS rockets. Arrange the terrorists with a wake-up, destroying their camps, equipment and buildings.
"Green takes" to help you. But where the terrorists are, there are also hostages. Shoot the barracks indicated on the map, and take aboard the survivors of this meat grinder. Look, do not confuse the hostages with the bandits. Somewhere near the dwelling of bonded scientists there are barracks with captured American soldiers and a shot down pilot. Only you can return freedom to "good American guys."
And here is the head of the drug mafia Drug Lord - an inveterate scoundrel. It was he who created in the jungle factories for the production of combat aircraft and spare parts for them. This all has to be smashed to both the outside and inside. Do not take prisoners! However, except one, which will tell you the location of hidden ammunition and fuel for your helicopter.

At this stage, you will continue successful operations to destroy the economy of Drug Lord and rescue the hostages. Your actions will finally attract the attention of the world community, which will be expressed in connection with the operations of the UN peacekeeping forces. Only they can supply you with a super secret weapon - a THUNDER motorcycle equipped with a large-caliber machine gun, a rocket launcher and anti-tank mines of delayed action. With such a marvelous motorcycle, no tank is terrible for you.
L defeat the drug mafia at this stage, complete the fact that flying away from the battlefield to rest, take with you a safe.

In trouble I got Wild Bill pilot special. troops. He was shot down while performing a secret mission. After the disaster, Bill was captured and put in a "snowy" prison. Your task is to rescue the pilot and 5 more prisoners. But not only Bill was in trouble. In the captivity was and the Soviet general. Tear it from the paws of the enemy, and the general will show you the location of the missile installations. They are now, and you will work hard. And take one of the nuclear warheads as a souvenir, returning to the base.

Among the mass of problems that you have to solve at this stage, two should be distinguished. This is the destruction of plantations of drugs and missile installations aimed directly at the White House. However, in the end, you will learn that the previous nuclear warhead was not the last in Drug Lord's bins. Take her with you.

Drug Lord is a cunning couple. Covered his nuclear missiles, spread atomic bombs, and he took yes and stibri from aircraft carriers no less destructive missiles such as TOMAGAVK (land-to-ground). Yes, and disguised them under the mountains, bastard! That makes the task almost impossible. After all, to search for the necessary mountain among a pile of mountains is sometimes no less difficult than a needle in a haystack. Yes, and the enemy, as luck would have it, some kind of quick-fire and far-sighted has become. Do not rush. I'll tell you here: carry only those mountains that are low, with dull tips and a wide base. As a rule, these mountains lie in the west of the towers before you, as well as in the north and north-east.

Aaaaah! We're home again! But it's too early to rejoice. "War" is still going on. So, first you as a warm-up will have to hold a presidential airplane for the outskirts of the city. This is not difficult, because the terrorists, seeing your helicopter, begin to shoot at you, not the president. I would first dunk the president, and then even you, even if it cost me my life. Washington is in danger. The White House is under enemy fire. SOS! The whole army of Drug Lord'a gone mad, attacking everything and everything. You have to correct this shortcoming. Destroy the entire enemy army. To be exact, tanks. Since they are not shown on the map, you will have to fly all inch by inch (hectare per hectare). That's a bastard! All the same he managed, contagion, to create four nuclear missiles, and now they are sent in 18-wheeled trucks to meet the White House! Stop them! Otherwise, they will crash into it, and a big BUUuuMMMMM will happen!
‹
›
Home
View web version