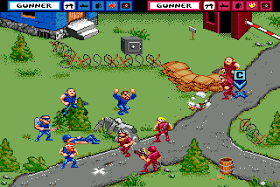 Genre: Action, Strategy / Tactics
Perspective: Bird's-eye view
Visual: Isometric
Gameplay: Arcade
Pacing: Real-Time
Published by: Electronic Arts
Developed by: Game Refuge Inc.
Released: 1993
Platform: SEGA Genesis / Mega Drive
Before the start of hostilities, you are invited to take the course of a young fighter,
During which it is possible to familiarize with details of management of the soldiers and to improve skills of shooting. There are three game modes to choose from: one player, two (against the computer) and two
(Against each other). On the map you choose the terrain for the battle. Winning the sections of the map, you will gradually get to the headquarters of the enemy and, after defeating it there, your squad will move to the next level. Battles take place in a five-to-five format with a preliminary selection of soldiers. Each of them is armed with one of the following weapons: Bazooka, submachine gun, flamethrower, grenade, dynamite. The most interesting game mode is the two of them versus the computer. In this case, you and your partner have two fighters at your disposal. The graphics in the game at the middle level - as well as the musical accompaniment. Despite this, you can play an infinite number of times in General Chaos. To do this, download Rom of this game and use the emulator of the prefix Sega.