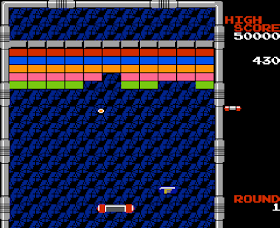 Genre: Action
Perspective: Top-down
Visual: Fixed / Flip-screen
Gameplay: Arcade, Paddle / Pong
Setting: Sci-Fi / Futuristic
Published by: Taito America Corporation
Developed by: Taito Corporation
Released: 1987
Platform: Nintendo (NES)
If you have been fond of games for a long time, and still do not know what "Arkanoid" is, we sincerely sympathize with you.The game was created by the company "Taito" specifically for gaming machines. The success was great, and machine guns were released with new versions of the game. At the same time, the game is released for most existing platforms: from Commodore 64 to Apple II, from ZX Spectrum to NES. "Arkanoid" can be called "the first after Tetris" game, because by popularity it is second only to the offspring of Pajitnov.And still, if you do not know anything about such classics, I will remind you that the main task in the game is to break all the bricks with the help of a ball, beating off it, as it is customarily called, a racket. Knocking out certain bricks, you can get different bonuses, they greatly facilitate (or make it difficult - there are also such) the passage of the game.Like Tetris, different versions of arkanoid-like games are released to this day on different platforms!
‹
›
Home
View web version