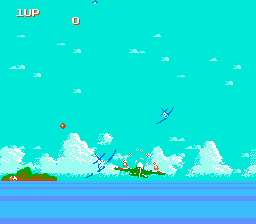 Genre: Action
Perspective: Behind view
Gameplay: Shooter
Setting: World War II
Vehicular: Flight / Aviation
Published by: Taito Corporation
Developed by: Taito Corporation
Released: 1985
Platform: Nintendo (NES)
The aircraft is equipped with machine guns and Player torpedoes, as well as an unlimited supply of ammunition.
The color of the sky changes depending on the time of day (day, evening, night). You have to basically fight fighter F6F Hellcats. Sometimes a player will be flying on the B-24 Liberator.Vragi you are expected not only in the air but by land and sea. Play with each level becomes harder, longer attack enemies and get to them not at random will come out. Stages nice enough to pass the time.

When starting torpedoes, note the following. First, by firing a torpedo aim should be to proactively, given that the torpedo, too, need time to swim to the ship target. And secondly, torpedo tube is not a machine gun, and the two launches will take some time.
The huge four-engine aircraft need to destroy in part, in the motor.
If you manage to knock off two consecutive four-engined aircraft, the screen diagonal crosses lined the enemy artificial satellite, finishing moves for which you get extra points.
Along the coast of the island floats a small boat, but it lies in the enemy: death. Hit him in the torpedo explosion and put an end once and with the island and with the aircraft, and ships and submarines.
Submarines, which run along the coast and emerges three times in succession, you can only torpedo surfaced.
The award of 10,000 points can be earned if hit by a torpedo in the rider, galloping away on the shore of the island. To be more precise aim, lower drop down to the water.
The use of rockets has two features. The first - when shooting this type of armament should be aimed with anticipation, given that the projectile needs time to reach the target. The second - between the two starts must pass a certain time. Large four-engine aircraft must be destroyed in parts - pomotorno. If you shoot down two aircraft in a row, the screen diagonally crosses the damaged enemy satellite, for which you will gain additional points. After flying to the island, you will find a small ship cruising along the shore. It must be fired with a missile, if the shot is successful, then by one shot destroy the naval and air bases located on the island.
‹
›
Home
View web version