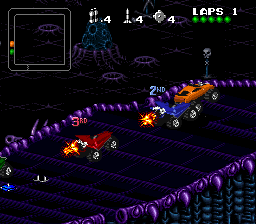 Genre: Action, Racing / Driving
Perspective: Bird's-eye view
Gameplay: Arcade, Shooter
Setting: Sci-Fi / Futuristic
Published by: Interplay Productions
Developed by: Silicon & Synapse
Released: 1993
Platforms: Super Nintendo (SNES), SEGA Genesis / Mega Drive
In each race four riders taking part, depending on the mode selected by one of them or two players can control the remaining cars are driven by artificial intelligence of the game. Speedway is displayed in an isometric view.
The main focus of the game is made on an opportunity to attack the opponent; However, the car exploded a few seconds, and then turns on the road to full health, while only caused damage - the loss of the enemy and delay their position. Players get 'attack bonus "in the form of monetary compensation whenever the car blow up the opponent with your weapon (and similar" bonus round "when the bypass opponent on one lap). Destruction and restoration of vehicles as contribute to distributed on the road mines and first aid kits. Also on the track there are cash bonuses. Among other obstacles - a puddle of motor oil, icy areas or pools of lava (depending on the planet on which the race is held), as well as many jumps and rare abyss.
Events taking place on the track, highlights commentator «Loudmouth Larry» (Larry «Supermouth» Huffman), who enthusiastically gives phrases like «The stage is set, the green flag drops!» Or «Rip: is about to blow!» (Between the name of the character and the following phrase is always present him a slight pause, which is explained by the fact that for each name and each phrase is used a single sound bite).
In between races, players can spend the money earned to improve the equipment of his car (engine, tires, suspension and armor), or an increase of ammunition (energy beams, missiles, oil, mines) and the stock turbo (jumping, acceleration), to a maximum of 7 slots. Despite the limited supply, and turbo boost expended weapons recovered after each round.
Each race includes four laps. Money is needed to buy new machines and improvements and points - to go to the next league, or to the next planet. In the two-player game, if only one of them has a sufficient number of points, a character asks: «Leave your loser friend behind?» («Leave your friend a loser behind?"), Allowing the player to continue alone and removing the second player from game. Leave the player can only hope that he wrote the most recent password (available on the screen «F / X») and that the more successful the player will restore the game and give him a second chance.

Dirt Devil. Volkswagen Beetle resembles. It has all the advantages and disadvantages of the car 60s. Slow going, and its sturdy body like armor beetle. Armed with a gun and a device coupled to bouncing. Can leave puddles of oil on the road, shoot down control from pursuers - they started to record (only on wheel cars).
Marauder, like the Chevrolet Camaro SS 1967. This machine is a little faster (particularly noticeable on direct distance), but behaves worse on trampolines. Other characteristics do not differ from Dirt Devil.
Air Blade, selachians car with the upper jet instead of devices for jumping. The machine faster than Dirt Devil and Marauder, but is more expensive. Weapon - simple but powerful missiles (the ratio of combat power: 2=3 rocket projectile) and mines instead of butter (usually 3 mines explode any object on the road).
Battle TRACK, a hybrid car and the speed of the tank. His tracks are not worse wheels, the engine is more powerful than the Air Blade, a jet engine works more efficiently. In addition, the tracks can not be afraid oversteer. Mines and rockets attached. Mina this car 3 seconds after setting is divided into 4 mines and then disappear. Hit a mine when she was "at variance" means death for any car. In addition, this type of mines can be discharged into the air.
Havac, hovercraft. Not afraid of sharp turns even on icy road, and the speed he has more than Battle TRACK. Armed with homing missiles instead of shells, which, however, can not be induced too distant target. Another minus those shells - extremely low power (to blow up Air Blade requires six of these "balls"). In the version for SEGA mines are divided as well as at the Battle Track.

Rockets / bullets / shells - a weapon of attack. A maximum of seven slots.
Spikes / Mines / Oil - the weapon of passive defense. A maximum of seven slots.
Apparatus for jumping (only the first two cars - Dirt Devil and Marauder) - helps to cut steep slopes and turns, as well as jump over mines and oil.
Rocket boosters - are essential for speed dialing speed.
Armor - saves the machine from enemy shells, mines and rams. It may be levels 1-4.
Motor - greatly increases. It may be levels 1-4.
Speed ​​in this game depends on the position on the track, that is, the leader always has a lower speed than the last race (for the same class of cars) to create a balance of speed, and to give an opportunity to catch up weak links, and destroy the enemy.
Wheels - reduce drifting on turning. There may be 1-4 level.
Suspension - helps soft landing after the jump and fly over the route. It may be levels 1-4.
‹
›
Home
View web version