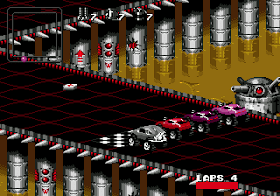 Genre: Action, Racing / Driving
Perspective: Bird's-eye view
Gameplay: Arcade, Shooter
Setting: Sci-Fi / Futuristic
Published by: Interplay Productions
Developed by: Blizzard Entertainment Inc.
Released: 1994
Platforms: SEGA Genesis / Mega Drive, Super Nintendo (SNES)
Before you, a killer racing game with elements of an action movie! Complete chaos on the road to you is assured, because in these races there are no rules, but there are various armed cars, as well as crazy racers ready for anything for the sake of victory. You are just one of these riders, traveling on planets, participating in races to win the title of the best of the best. The game is filled with drive, the gameplay keeps you in suspense. Music tracks performed by such legendary bands as Led Zepplin, Deep Purple, Black Sabbat simply fit perfectly into the atmosphere of the races. Rock N 'Roll Racing is undoubtedly one of the best, and perhaps even the best game in this genre.