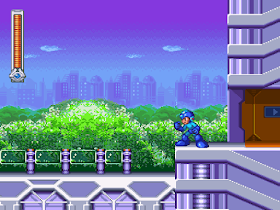 Genre: Action
Perspective: 3rd-person, Side view
Gameplay: Platform, Shooter
Setting: Sci-Fi / Futuristic
Art: Anime / Manga
Published by: Capcom Co.
Developed by: Capcom Co.
Released: 1998
Platforms: Super Nintendo (SNES), Game Boy Advance (GBA)
Ninth of the fighter against evil adventure Mega Man not received a serial number in the title, published in the demolished only in Japan. In this game, in addition to the Mega Man, you can play for his eternal rival Bass (in Jap. Version of his name Forte). The graphics in the game is not bad, sprites are transferred directly from the previous section on the Playstation. But the music in the background and basically does not quite live up to the best examples of melodies from earlier games in the series. Gameplay varies depending on the character you choose. For Bass played significantly better than Mega Man. The complexity of the game is high even by the standards of the series. Who likes a good adventure fighting, he could very well play this game.
‹
›
Home
View web version