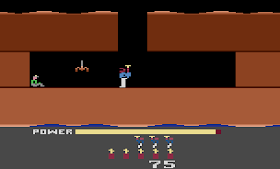 Genre: Action
Perspective: Side view
Visual: Fixed / Flip-screen
Gameplay: Arcade, Platform
Published by: Activision
Developed by: Activision
Released: 1984
Platforms: Atari 2600, MSX
The player control a character named Roderick Hero (sometimes called "R. Hero", a play of words with the phrase "our hero"), which plays the role of a rescue team from one person. The miners who worked on Mount Leone fell into a trap under the ground, and Roderick must get to them.
The player has a helicopter engine mounted on a backpack (like Carlson's), which allows him to hang in one place and fly, as well as a laser fixed on the helmet and a limited number of dynamite pieces. Each level consists of a labyrinth of shaft tunnels, through which Roderick must reach the miner trapped below. The backpack has a limited supply of energy, so the miner needs to get to the end of it.
There are a number of obstacles between Roderick and the miners. Some mines are blocked by landslides, for the clearing of which requires dynamite. Roderick should not stand too close to the exploding dynamite. A laser in a helmet can also destroy collapses, but it does so much more slowly than dynamite. Some parts of the mine are illuminated by lanterns. If the lantern is destroyed, the part in which it was located becomes invisible. Exploding dynamite shines the mine for a short time. The mines are inhabited by spiders, bats and other unknown creatures, whose touch is fatal. These creatures can be destroyed with a laser beam or dynamite exploded next to them. At later levels, the player will encounter a magma, which, like caves, can be blown up to clear the way, but, like the creature, is deadly if touched. Finally, the deepest mines are flooded, which requires the player to fly over the water.
Points are awarded for each cleared blockage and each destroyed monster. When a player rescues a miner, players are also credited for this, taking into account the remaining charge of the backpack and the number of remaining dynamite pieces. A new life is given for every 20,000 points.
‹
›
Home
View web version